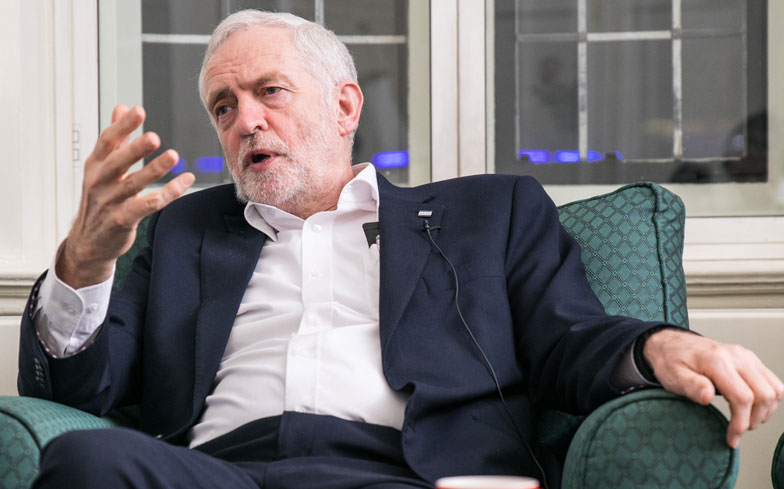 Labour leader Jeremy Corbyn has put his unwavering support behind same-sex sex and relationships education being introduced into schools in a new interview with Gay Times.

The leader of the opposition sat down with Homo Sapiens‘ Will Young and Chris Sweeney, as well as Gay Times, to mark LGBT History Month.

We raised the issue that there are generations of gay men in the UK who grew up without adequate sex and relationships education during their formative years, and that the system now needs to change to provide support for LGBTQ youth going forward. Will Young added: “That’s very important and it makes me think of pornography. I think it’s so rife and people can get… people have phones when they’re younger now and whether you’re heterosexual or gay, bisexual, whatever – people will formulate their opinions on what a relationship is by watching pornography.

Jeremy Corbyn agreed that LGBTQ teens getting their sex education from pornography is a concern, adding: “A lot of that is violent and exploitative.”

It comes after the new Secretary of State for Education, Damian Hinds, confirmed earlier this week that he will back parents’ rights to pull their children out of sex education classes in school, as the UK Government moves forward with plans for a more inclusive syllabus to be introduced.

His predecessor, Justine Greening, had previously backed plans for compulsory LGBTQ-inclusive sex and relationships education, but Hinds has seemingly scrapped that idea.

“There’s already an established right to take your children out of sex education lessons,” he told the BBC. “Those lessons will be in all schools… it will be compulsory to have them in all schools, but as I say there’s an established right which will continue for parents to be able to withdraw their children from the sex education bits of relationships and sex education.

“That right exists and will continue.”

Elsewhere, Jeremy Corbyn and Will Young also spoke frankly with Gay Times about the importance of LGBT History Month and why it needs to be marked annually.

“We always have to keep on looking back, I think, to see one how far we’ve come to remind ourselves what people had to go through,” said Will. “And also, as Ian McKellen said, ‘We [stand] on the shoulders of giants’.”

Jeremy added: “And those who were frightened to admit their sexuality because of repression, and that goes back a long way more in history.

“Lord Byron spent a lot of time in Switzerland because there was no prosecutable law there like there was here at that time, like many others. I think we’ve got to learn from our history.

“I give Alan Turing as an example, I give Oscar Wilde – there’s a lot of others.”

You can listen to Jeremy Corbyn on the Homo Sapiens podcast – hosted by Will Young and Chris Sweeney – now, with Homo Sapiens Extra available on 23 February.