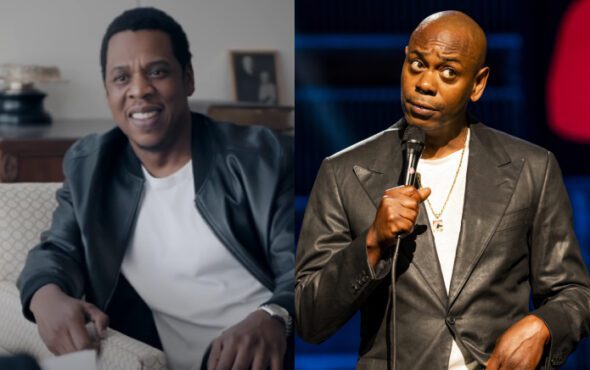 Jay-Z has defended Dave Chappelle following the backlash over his latest comedy special that included an array of transphobic comments.

The Closer, which was released on Netflix on 5 October, has faced widespread criticism from the LGBTQ+ community because of the remarks it features.

“They cancelled J.K. Rowling — my God. [Effectively] she said gender was a fact, the trans community got mad as shit, they started calling her a TERF,” Chappelle says.

This, along with Netflix’s response to criticism of the special, resulted in staff at the streaming giant staging a walkout in protest of it on 20 October.

Chappelle recently delivered Jay-Z’s induction to the Rock and Roll Hall of Fame in which he called the artist an example of “Black excellence”.

In a Twitter Spaces conversation on 5 November, the 99 Problems hitmaker hailed the comedian as a “super genius” who is “brilliant”.

“I think that Dave is super brave and super genius,” Jay-Z said. “If you spend time with him, he’s brilliant.”

When asked a question by Craig Jenkins, a music critic at Vulture, the star acknowledged that Chappelle had “pushed a lot of buttons” before signalling his discomfort with some of his material through a series of unimpressed sounds.

The rapper went on to state that disagreements are what help people come to the bottom of conflicting issues.

He said: “We have to speak with one another when we disagree. That’s how we get to the bottom of it, that’s what therapy is.

Jay-Z then discussed how social media algorithms, according to him, restrict debate between people with opposing views.

“We had all these fake conversations for all this time about race until Trump was in office, then we got to see people for who they truly were,” he explained.

After being asked if he thought Chappelle’s comments were divisive, Jay-Z said he could not speak on behalf of the comedian.

“When you’re making great art, you have to be fearless and create something that you believe in,” he said.