Ménage à trois: Get inside the latest Gay Times 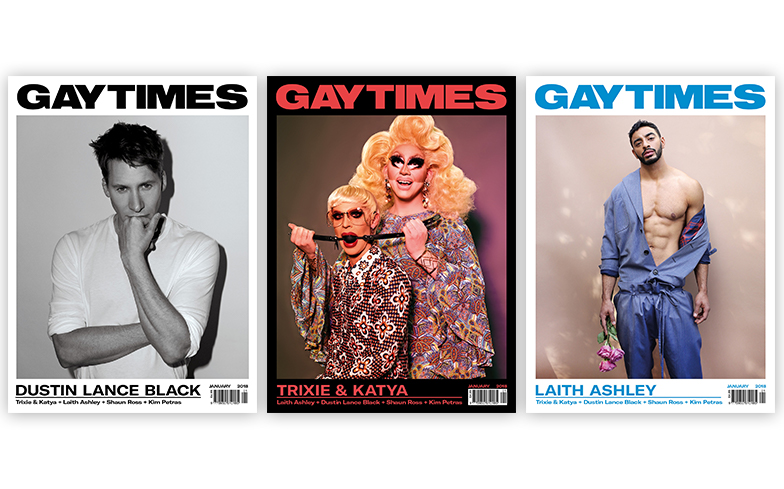 In the first issue of Gay Times for 2018, we continue our legacy of providing a platform for the far reaches of our community. Take a peek inside below and get yours now: buy.gaytimes.co.uk

Join trans activist Shon Faye in conversation with Laith Ashley as they exchange their varied experiences of privilege, trans visibility in the age of Trump and the pitfalls of diversity.

“I’m tired of being sensationalised for being this trans person or asked things that don’t really matter,” Laith explains, “Like I’m proud of being who I am and being a representative of the trans community, but I also know I have some privilege being a cis passing man.” Dustin Lance Black is the Oscar-winning writer of MILK. With new projects on the way, we spoke with him about the inspiration he finds from unearthing lost queer histories, and his marriage to UK diving champion Tom Daley.

“We’ve been together now almost five years and I’m still discovering new things about him and I feel really lucky about that,” Dustin says. “There’s a constant renewal to our relationship and I’ve never experienced anything like it. It’s really exciting. I mean, we’re certainly not two perfect people. We have fights. Although when we fight, we just get very, very quiet. And then we know we’re in trouble, one or the other! We’re certainly not doing it for public approval.”

As they bathe in the success of their new show on Viceland, we caught up with the funniest duo to emerge from RuPaul’s Drag Race: Trixie Mattel and Yekaterina Petrovna Zamaldchikova (your Dad just calls her Katya). Join the cover girls in conversation as they put far more than bass in their walk…

Elsewhere in the issue: MILK prepares for All Stars 3 and continues their activism streak; Kim Petras on being the youngest ever person to undergo gender confirmation surgery and working with Paris Hilton; Matt Law on his troubled past; the rock ‘n’ roll revolutionary Ezra Furman; albino model Shaun Ross on working with Beyonce; the Warwick Rowers bare all; making it cool to say you’ve got ‘daddy issues’; plus fashion, culture, music, film, travel and much more.