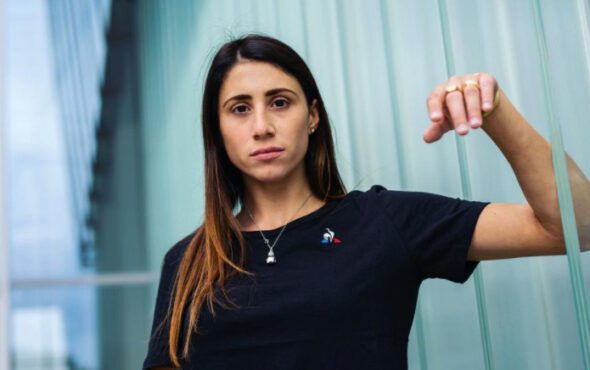 Olympic boxer Irma Testa has publicly come out as queer in a brand new interview.

Earlier this year, the 2020 Tokyo Olympics took place after being delayed due to the ongoing COVID-19 pandemic.

During this year’s games, a record-breaking amount of openly LGBTQ+ athletes competed in the highly anticipated event.

Italian Boxer Irma Testa, who won the bronze for Italy in Tokyo, is now part of the inspirational Team LGBTQ+.

In an interview with Vanity Fair Italia, the 23-year-old publicly came out as part of the queer community and gave insight into her journey.

“The people who are close to me have known for years but I think it is right to tell everyone now,” she said.

“Speaking of sexual orientation in the world of sport has a special value, because champions are expected to be perfect. And for many homosexuality is still an imperfection.

“Many athletes stay silent and hide away for fear of damaging their image. For me, too, it was like that up to a few months ago.”

After securing her bronze medal, the young athlete described her accomplishment as a “shield” and a way to solidify her athletic journey.

“But that Tokyo medal has become my shield: now that the athlete Irma is safe, the female Irma can be sincere,” she explained.

When asked why she didn’t come out earlier, Testa revealed that she was “afraid” of people judging her based on her sexuality rather than her talent.

“I was afraid people would see me compete and think: ‘Ah look, there’s that one like this’, instead of saying ‘[look] how good she is,'” she said.

She went on to say that coming out was “fundamental” because she wanted to be a positive influence for other queer people who may be discriminated against.

“There are people who suffer from discrimination, who are bullied, who are unable to build a life for themselves because they do not know how to relate to a society that is hostile to them,” she explained.

“Every human being should be protected and safe. Or at least protected. Who can protect you if not the state, its institutions, its laws?

“There are still too many people discriminated against and this is not good. It is no longer good. I can’t do much, but I can, by telling the truth about myself, also say that nothing is wrong.”

In terms of her identity, Testa said that she doesn’t want to label her sexuality because she doesn’t “like labels”.

“I’m not saying I’m a lesbian because there can also be a man in my future. Since I was a little girl I have been attracted to women, but sometimes I have also felt it to men,” she said.

“The labels must be there: to make things become normal you must first go through the labels. But I don’t use them because I don’t like them.”

According to a report from Openly/Thomson Reuters Foundation, if Team LGBTQ+ competed in this year’s coveted games as a country they would have ranked in seventh place – in front of the Netherlands and behind Australia.