International Lesbian Day: Char Bailey on the importance of self-love in the LGBTQ+ community 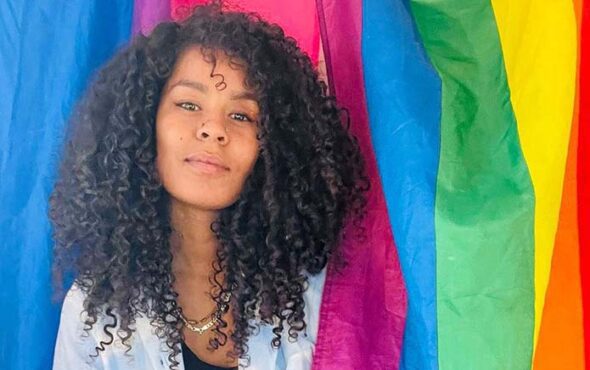 Char Bailey shares what growing up as a lesbian of colour was like for her and why UK Black Pride feels like “home”.

In celebration of International Lesbian Day on 8 October, Bailey appears on Just Like Us’ new podcast series, Growing up LGBT+, where she shares why loving yourself as an LGBTQ+ person is so important.

Bailey, who is now a life coach and Head of Wellbeing and Education at Birmingham Pride, explains on the podcast that role models and other LGBTQ+ people were not easy to come by when she was growing up.

She adds: “I spent a lot of time in Year 11 really ill in hospital and one of the school staff members was LGBT+ and there was a time that she came to visit me in hospital.

“And she brought me a stereotypical teen girl magazine with free make-up that completely wasn’t me and she also brought me a football magazine – and to me, that was a really nice, wholesome acceptance from her that she recognised that there was this fluidity in me. And [it] wasn’t ‘til later on that I knew that she was LGBT+.”

Bailey also opens up to Just Like Us’ ambassadors about her best friend coming out as trans when they were both in school.

“When I was 15 I was really privileged that my best friend came out as trans to me,” she shares. “Having them in my life and knowing the journey that they were on – although it was separate from my journey, just knowing that they existed – that was really supportive to me, just having them in my life as a friend and knowing what they were going through.”

Being a lesbian of colour was a “frightening and isolating” experience for Bailey at times, which led to Bailey hiding her sexuality “because it never felt safe” to come out.

“I come from a very white place, the majority of people where I live are white and so I often felt that I was the only person like me,” she says.

“And I had this idea that when I came into the LGBT+ community, that it would just be this safe haven of happiness and joy.

“But there is this real reality that there are these smaller groups – you know, the community is a microcosm of the world and so some of those same issues are prevalent in the LGBT+ community too.”

After discovering UK Black Pride, where she is still a member, things instantly changed for the better.

Bailey explains: “I saw that they were looking for people to help and I went to a meeting. That meeting was the biggest exhale that I’ve ever exhaled – I’d never sat round a table of Black or brown or poc.

“And there was even a question of ‘do you prefer Black or brown or poc?’ and no one had ever asked me that before. That was home for me, I just knew right there and then that that was the place I was going to stay.”

You can listen to the new podcast series from Just Like Us below or by clicking here, including Char Bailey’s episode.