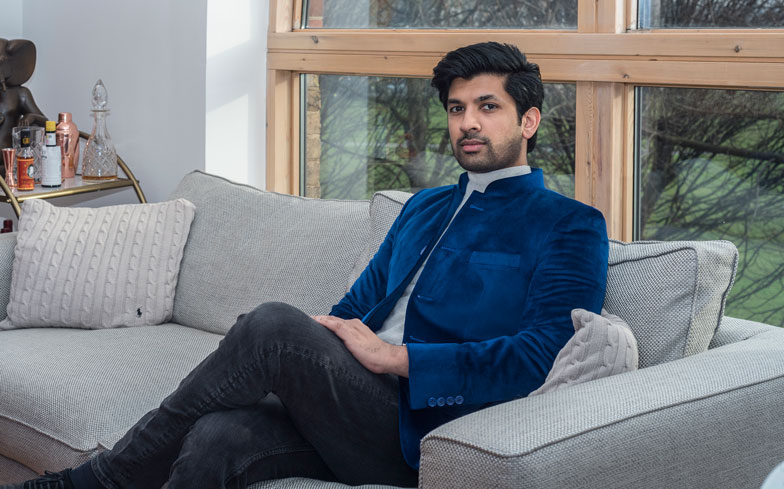 In his (grass) roots.

Last autumn, Amar Singh told the New York Times that the the world was becoming more and more troubling. “All the madness going on, from North Korea to white supremacy…” he despaired in a chat about his Islington-based Amar Gallery. And indeed, the Indian royal (a member of the Kapurthala Royal Family), who was raised in the UK, has put his money where his mouth is and tried to better our world. And this isn’t because he radiates any sort of entitlement or belief that his position can bring about change because he is who he is. The contrary, in fact. He doesn’t consider himself a royal and sees himself as a public servant fighting for equal rights.

In 2017, the 28-year-old achieved two major feats. Firstly, he launched his gallery, currently showcasing an exhibit entitled Eve, celebrating women and the female form. Secondly, he brought about a shift in the right direction for LGBTQ rights. This shift ever-so-slightly moved things away from the preposterous legal backtrack that took place in Singh’s native India in 2013. Having formally legalised homosexuality in 2009, the country reverted the act of being gay back to a criminal offence five years later, forcing LGBTQ people back into the closet and literally fearing for their lives. “Right now, if you were to try and hand out condoms to people in India to prevent sexually transmitted diseases, particularly HIV, you are running the risk of being beaten
by the police,” Amar explains. “They are enraged by the idea that homosexuality is ‘spreading’.”

Related: Ruth Hunt: “Our movement is not dimmed until every LGBTQ person is accepted without exception”

Amar detests the Indian Penal Code S377. It’s in his voice – in his tone, his eyes – whenever he brings it up. Which he does, a lot. He has so much palpable disdain for it. S377 catalogues homosexuality as an “unnatural offence” in which anyone who “voluntarily has carnal intercourse against the order of nature… shall be punished with imprisonment for life”. A great deal of people reading this piece right now could go to prison in India for what they do in private, in their bedrooms (or location of choice). Forget murder, rape… you’ve had sex with someone of the same gender, it’s off to jail you go.

“It still shocks me,” Amar laments, “and so I focus on educating families and reaching out to individuals who need support. Police contact [in India] is something that I avoid – hence why I have to do this under the radar. Sadly, it makes me feel we need to be more underground.”

The “we” he speaks of are his grassroots network – His Army of Love. Without any prompting – other than an inherent fury about the situation – Amar has spent time over the last two years congregating people in India who can revolt against this law and offer support to those who need it and have nowhere else to turn. And while this isn’t new news for anyone who has followed Amar’s plight over the past 18 months, his progress and collaborations in 2017 – and so far in 2018 – have seen encouraging traction. “I think we are beginning to see more and more supporters come through,” he says. “Even leading [Indian] politicians are showing support for LGBTQ rights, but we have the flip side of that: people who are vehemently denying it.”

His grassroots movement. “I’ve been funding individuals to spread and educate the message of women and LGBTQ rights. Let’s not forget women here – not just gay women. Last year there were reportedly 21 million abortions in India. There are millions more women in the country who are lost right now because they have been abandoned because nobody wants daughters. People are abandoning children because of their gender.” This is a dark state of affairs indeed. Yet in the last year alone, the work Amar has done to fight this from afar is astounding. “It grows every day – in terms of outreach and in terms of people who are positively affected. And that’s the best scenario we can hope for,” he explains to us. Unsurprisingly, he’s far from done. This isn’t a man who is pumping money blindly into a movement across the globe while happy to rest of his laurels at a plush London pad and haut monde art gallery. Amar is friends with Prince Manvendra Singh Gohil, an openly gay Indian royal (the only one) and considers him a close ally and friend. So close in fact that the Prince Manvendra has named his LGBTQ centre Hanumanteshwar Amar, after him.

“It’s a great honour and I am truly thrilled,” Amar admits. “Even though I’m not gay, I’m going to be the main supporter of the centre.” This endeavour is quite literally in Prince Manvendra’s own home. Granted, his home is a palace, but he has allocated 15 acres of his grounds for the centre as a refuge to those left out in the cold because they are LGBTQ. “I mean, it’s the utter act of selflessness,” Amar says of the venture. “The centre will have a shelter for those rendered homeless when they are thrown out of their home after coming out to their parents. Care will be given to those feeling insecure. They will be educated on sexual health and told it’s okay and fine and great to be gay, or a woman.” The centre isn’t purely for those who are LGBTQ, and it strives to
“educate those who hate to open up their hearts”. Amar adding: “Hate is not the answer to your own flesh and blood.”

While still being constructed, Prince Manvendra has already opened up the palace. The task at hand is to ensure people know it’s accessible to them, should they need it.

When Prince Manvendra – who openly lives with a partner – first came out, his palace was infiltrated and attacked in a modern-day villagers with pitchforks scenario. And this brings about the obvious question: Will this happen again, once the word is out about this facility inside the palace walls? “Probably,” Amar shrugs. “That’s why there’s more need for unity and education now – action needs to be taken. I want to see an India where there are LGBTQ centres all over the country. And you know, Prince Manvendra meets with politicians constantly to talk about abolishing this Penal Code. These are politicians who are meant to serve the public and we are the public.” The frustration and disdain that Amar so openly expresses – something that has, indeed, seen his own life come under threat on visits to his native country – is not a dislike of India. “There are so many great things in India,” he declares. “I’ll be going back there later in the year. I speak to people there weekly, including Prince Manvendra. I’m just referring to this one aspect of the country.

“There’s police misconduct in America right? So multiply that by however many more people and policemen there are in India and you see how dire the situation is. Yet, in the US, there are rallies and movements and marches. Why can’t we have that in India too? People over there are fighting for their lives.”

And so, what does Amar want to see happen from his efforts, other than equality for all? What is his short-term goal? It’s a big one, and his ambition has no bounds.

“In 2019, I want there to be no Section 377 Penal Code. It’s unnecessary. Get rid of it! That act is a misuse of the law and it sends a terrible message from the largest democracy in the world that we oppose homosexuality, which is just ridiculous.

“Gay clubs in India are considered wrong. That’s an encroachment upon freedom. Why shouldn’t we celebrate or flaunt who we are? We have a long way to go, but that doesn’t mean it should take another decade.”