Should I act on my gay feelings? How do I get started? 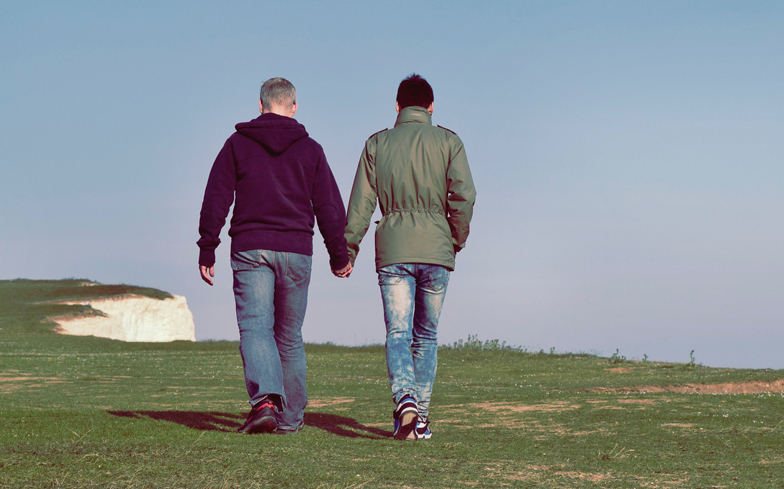 © Photo by Stanley Dai on Unsplash

I’m a guy in my early 40s who has always lived a heterosexual life. For some time now, I’ve had thoughts or feelings that I might be gay although I have done nothing about it.

All my friends are straight, so I have nobody to talk to about this, but when I found myself in Manchester’s gay village recently, I felt a sense of belonging somewhere, like these were my people. I really want to act on my feelings but have no idea how.

I tried Tinder but kept chickening out when men matched with me. I don’t think it’s fair to arrange dates with men when I don’t know whether I am gay or bi, or whatever; I’d be wasting their time. I’m reluctant to try gay apps like Grindr – I have a daughter at secondary school and wouldn’t want her to be bullied because of my sexuality, whatever it may be, plus my own parents are very homophobic.

Can I say I’m gay without ever trying gay sex? I’m not really looking for hookups; I really just want to get up close with a guy, kiss, passionately and see how it feels to me. I don’t need sex to do that, I’d know. I have space and time to have a secret life, but I’d rather not if I could avoid it. How do I even make that first step? Should I even do this? For many, the first foray into the gay scene – even if they’re just taking a look, as you were – can be overwhelming and intimidating. If it felt like “home”, as you say, this is a good sign. It can be very liberating to realise who you are and what you want even if, in this case, you’re not sure how to go about it.

As for how to make things happen: as long as you are honest about your experience, intentions etc, you will probably find there are other guys like you on the dreaded apps. It’s not just guys looking for sex. Many guys use them to find flatmates, friends or even collaborate on work. Getting to know yourself as a person is more important, however, than kissing someone to unlock potentially gay feelings – it’s not like an enchantment that can be lifted, I’m afraid. It usually takes a little more than that.

Be aware that other gay or bi men have feelings too, and while they will be understanding to your plight, you may not find many willing to let you use them as a litmus paper for your feelings, with you getting to work through all your emotions while they perform the role of “generic gay person with tongue”. Be respectful of everyone’s journey.

Do a bit of research on all the different apps out there and try to meet some likeminded people. Yes, it can be daunting “revealing yourself” but you don’t have to have a public picture, you can just send pics privately to guys, or have “locked” pictures, depending on what you use. The key is just to be honest about what you’re looking for and not make anyone uncomfortable or feel bad for not living up to your ideals.

There is a Q that often follows the end of LGBT and it stands for Questioning.

So many guys who think they might be gay or bi want to get the sex bit over with, to see whether they like it, but that can be counter productive. There is more to the gay or bi experience than just sex or wanting to kiss someone. It’s about being around people who like and understand you for who you are. If you’re looking for things to happen “naturally” and want to make friends, why not look into support or activity groups. You don’t *have* to label yourself at all, by the way, this is the beauty of 2017 – nobody can force you to identify in any way whatsoever, just so long as you’re being honest and not taking advantage of anyone.

There is a Q that often follows the end of LGBT and it stands for Questioning. There are tonnes of groups out there for like-minded guys or those who haven’t quite made their mind up – groups even a “classic hetero” like you could join! Rugby teams, football training sessions, running, music, drama workshops, book clubs, drinks events, choirs. What are your interests? You don’t have to go niche, just do a bit of Googling – whatever you’re into, there’ll be an LGBTQ group doing it somewhere.

Let’s talk about your daughter and your parents and living a secret life. It seems to me you already are. How is it working out for you? There are always bargains we make with ourselves about how our actions might affect others. Which is more important here, we ask ourselves, my happiness or theirs? We rarely come to the conclusion that both are equally important and not mutually exclusive, although this is usually the case.

If you do turn out to be gay or bi and decide to identify that way, you can’t hide things from your daughter for ever. How long would be acceptable? Once she’s finished school, gone to uni, got married? There is never a “right” time – there will always be an excuse. It has to be said you don’t have to say *anything* to her until you have made up your own mind about who you are and what you want, which could be years down the line anyway. Don’t let future *potential* problems strangle your development here in the present.

What I’d remind you is there’s no “eureka” moment

As for her schoolmates, children can be horrible, yes, but they are generally much more clued-up and tolerant than we were at school. Kids are coming out as L G B or T much, much younger than in “our day” – anyone who looks down on them is usually dealt with pretty fast. That’s not to say homophobic bullying doesn’t go on; it is still absolutely rife. But in the wider environment, homosexuality or bisexuality generally has much less currency than it used to. Sound your daughter out about her attitudes. What does she think about gay celebrities? Gay marriage? Do her friends talk about it? That kind of thing. LGBT issues are in the news constantly – the Australian marriage equality row is a hot topic for example – talk about them with her to get an idea of what someone her age is thinking. I reckon she’ll surprise you.

Your parents. Ah, man. I don’t know. I’d like to think they would change their attitudes when the subject fell closer to home. I tend to find that parents’ prejudices belong to faraway people they don’t understand, not the son in front of them. You don’t need to tell them anything yet, anyway, as I said above. I guess the thing to remember is you can go on living half a life to keep your homophobic parents happy or you could challenge it and show them it doesn’t change anything about you in any way. I guess it depends how their homophobia manifests itself. Is it angry, and nasty? What is at the root of it? I can’t guarantee you’ll turn them into liberals overnight but you owe it yourself not to pander to their prejudices.

As for *should* you do this? Only you can answer this. What does an alternative lifestyle look like? Will you be happy, and fulfilled? Canal St felt like home – don’t you want to go there again? Could you, if you ended up staying heterosexual? Ditch the labels, forget the categories and concentrate on being yourself and all that entails. Try new things, be realistic about whether they’re right for you, and try not to mess anyone else up in the process.

What I’d remind you is there’s no “eureka” moment – you may not like it if you try it once, but it doesn’t mean it isn’t for you, so don’t be disappointed. Don’t be afraid to take this gradually. You’re impatient and you need answers, yes, but the truth will only reveal itself to you when it thinks you can handle it.

Sounds like the guy is ‘questioning’ which is part of the community, so his sense of belonging is definitely valid whether he’s gay or not.

I’d probably recommend – somewhat idealistically – to use Tinder to make gay friends that might take him to the Village and explore.

Use the apps to chat to guys and explore your feelings rather than looking for dates, I'd say. Be open about what you're going through.

It’s going to be very difficult to find anyone who wants to kiss “passionately” as an experiment. The issue isn’t lack of experience but…

He may feel more comfortable going to LGBT meetups that are non-sexual, such as a cinema group, so he can work on just making friends first.

It looks like he's Manchester based so @BiPhoria might be a good place to start. Low key and non sceney!