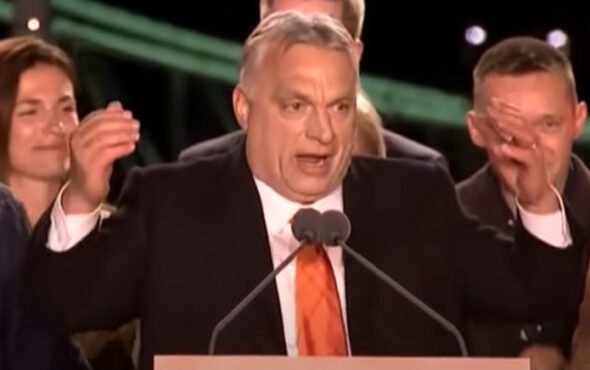 Citizens were asked to vote on four questions related to the community on 3 April, including whether or not sexual orientation should be taught to minors without parental consent.

However, its results are deemed non-binding because less than half of eligible voters cast valid ballots on all four questions – meaning either ‘yes’ or ‘no’ had to receive at least 50% of potential votes.

Despite this, more than 90% of voters supported the government’s campaign and Orbán’s team stated that he will still take the referendum as a victory, as he has done in the past.

“We have scored a victory so big, that it can be seen even from the Moon,” he said. “We have defended Hungary’s sovereignty and freedom.”

“Do you support the teaching of sexual orientation to minors in public education institutions without parental consent?”

Vote among all eligible voters

Threshold to meet: 50%+ of eligible voters voting either 'yes' or 'no' pic.twitter.com/7P2F20ABIk

His crackdown on LGBTQ+ rights in Hungary and frequent attacks on the European Union have been perceived as a way of generating higher voter turnout.

Orbán’s anti-LGBTQ+ rhetoric has been a key strategy to appeal to right-wing supporters and conservative voters, which he often aligns with the idea of safeguarding Christian values.

Under his rule, same-sex marriage has been outlawed in Hungary, gay men have been labelled paedophiles and trans people have been restricted from legally changing their gender.

His government has been critical of what it perceives to be ‘LGBTQ+ propaganda’ and has committed itself to defeating it.

LGBTQ+ people and activists are therefore fearful of what another term under his rule could look like for them.