Hungary is launching another attack on LGBTQ+ rights during the coronavirus pandemic.

Hungary’s right-wing government, led by Viktor Orbán, has submitted legislation to be voted on in December, which aims to ban same-sex couples from adopting children.

The legislation will mean that adoption will only be allowed for married couples, or a single person if they have permission from the Minister for Family Affairs, Katalin Novák.

If the law is approved, it would come into force in January 2021.

Another piece of legislation attacking LGBTQ+ rights was also submitted to the Hungarian parliament late on Tuesday (10 November).

The proposed legislation aims for children to be raised with Christian interpretations of gender roles, prevent schools from carrying out LGBTQ+ workshops and end all recognition of trans or non-binary rights.

This legislation hit out at more liberal countries, saying that “new, modern ideologies in the western world raise doubt about the creation of the male and female sex, and endanger the right of children to have healthy development.” It’s believed that the government has chosen to draft these new laws at this time, because coronavirus restrictions mean that LGBTQ+ activists are unable to take to the streets and protest.

In a statement, the Háttér Society, a human rights group in the country, said: “The timing is no coincidence: the proposals that severely limit legal rights and go against basic international and European human rights … were submitted at a time when… protests are not allowed.” 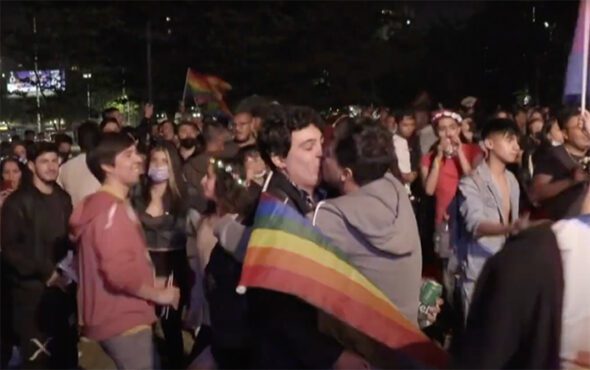 The group explained that the legislation would ban LGBTQ+ people from adopting children due to same-sex marriage not being recognised in the European country and that is was unlikely the minister would grant permission for an LGBTQ+ person who was single.

“Restricting the possibility of adoption to married couples reduces the number of potential adopters, thus preventing children left without parents from finding a family,” they said, adding: “We refuse to allow the government to use LGBT people as a political toy.” The move has already attracted international criticism, with French Green MEP, Gwendoline Delbos-Corfield, saying: “Once again the Hungarian government is using the pretext of the pandemic to undermine European values and attack people’s rights.

“The attempt to change the constitution in order to enshrine intolerance through defined gender roles is an attack on the LGBTI community and human rights.”

She added: “The Hungarian government should spend its time fighting the coronavirus and not the LGBTI community.”

Earlier this year, Hungary was accused of going “back to the dark ages” after it voted to end the legal recognition of trans people. The law, which was voted through by 134 to 56, defines gender as based on chromosomes at birth, and takes away the right of trans people to alter their gender and name on official documents.

This is not only damaging for the mental health and wellbeing of trans individuals, but could also be a risk to their safety as they can no longer choose a name that fits with their identified gender, a factor which could lead to them being regularly ‘outed’ in their daily life.