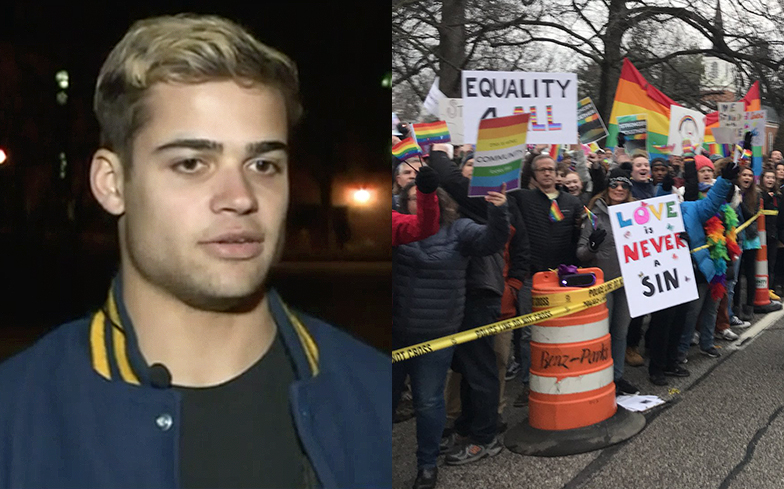 Hundreds of students at John Burroughs School in Missouri organised a counter-protest on Monday as members of the Westboro Baptist Church picketed the school for their celebration of openly gay student-athlete Jake Bain.

Bain, the star running back of the prep school’s football team, came out during a school assembly late last year, but while his fellow students were supportive, the Westboro Baptist Church announced plans for a protest.

A press release posted on the extremist group’s website labelled Jake a “smirking, proud fag child” and explained that their reason for picketing was to prevent “Satan’s agenda of planting pride across the land”.

But on the day the notoriously homophobic hate group were supposed to protest, hundreds from the community joined forces outside the school to show a “display of support” for Jake and LGBTQ students.

About 100 people came out to #StandWithJake this morning outside John Burroughs School for @Jakebain10 to counter the Westboro anti-gay hate protest. (My pics) pic.twitter.com/paz8LMd3Hg

“To know that I have all that love and support from so many people is just really cool,” Jake told Fox 2 Now.

“We’ve had a lot of videos inside from alumni that have showed their support, and we’ve had our own little Pride parade inside.

“The fact that there’s people that I’ve never even met or made connections with that are willing to come out here in the cold and show their support for me and my whole community is just really special.”

Allies came out in their droves with signs and rainbow flags, as pro-equality music played over speakers. The number of Jake’s supporters far outweighed the Westboro Baptist Church protestors.

Meanwhile, students celebrated their own ‘inclusive community’ inside the school, with speeches about acceptance, marches around the school, sing-alongs, and a Pride parade in the school’s gym.

Head of School at John Burroughs, Andy Abbott, said of Jake: “He’s a great athlete, but he’s a better kid. He’s a great student and he’s a great friend to his peers.”

But it wasn’t just the local community celebrating Jake’s right to be an openly gay man, as people around the world have been using the hashtag #StandWithJake on Twitter to voice their support for him.

Some people want to move our city and country forward. Others cling to hate and have godless hearts. I choose to #StandWithJake @Jakebain10

There's a special place in hell for people who show up and protest hate at John Burroughs school. #StandWithJake

We are proud to #standwithjake as we light the sky in rainbow!! pic.twitter.com/dJRrwZ0MOo

“Thank you all from the bottom of my heart to all who came to support the LGBTQ community at Burroughs this morning,” he wrote on Twitter. “Thank you all for shining your lights today.”