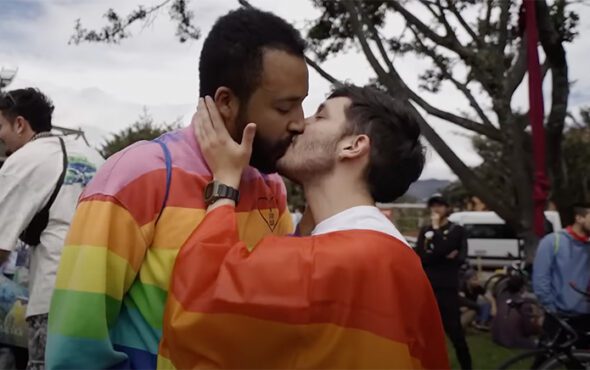 Hundreds of same-sex couples staged a ‘kiss-a-thon’ in a park in Bogotá, Colombia after a gay couple was attacked there.

Santiago Maldonado and Jorge Esteban Farías were targeted by a group of women – one of which wielded a broomstick – after the two kissed in public, the BBC reported.

Footage of the incident showed the culprits verbally abusing the couple, with one telling them that “in this neighbourhood we don’t allow sex in the park, especially not in front of children”.

One of the men then asks “what sex?” before stating that they had just kissed.

“If you don’t leave, we’ll lynch you,” someone then says back in the clip.

As a result of the incident, which was condemned by the city’s mayor, a gathering was staged in the park where it took place.

Organised on social media, it saw couples kiss in support of the victims and dance to music in celebration of the LGBTQ+ community.

Some held signs with messages such as “Kisses are signs of affection, not a crime” as others waved Pride flags.

David Alonzo, the official in charge of sexual diversity in Bogotá, confirmed that the attack is being investigated.