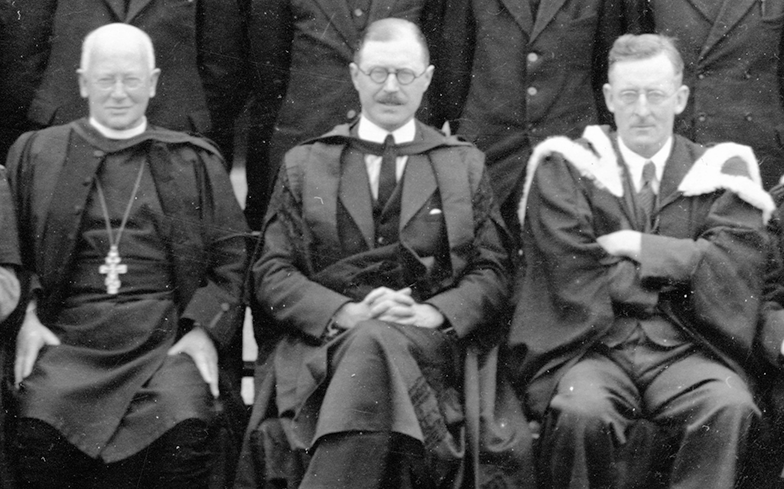 On a dark February evening in 1954, a 17-year-old schoolboy met a man on the Exeter to Taunton express. Within weeks, that schoolboy was on trial.

According to his prosecutor, Mr Kenneth Bain: ‘He got into conversation with a man in his compartment and made improper approaches. The man was a railway policeman and at Taunton took him into an office for questioning.’ The boy, Geoffrey Patrick Williamson, told them, ‘You may consider things morally wrong. I don’t.’

But Geoffrey had fallen into a trap laid by a ‘pretty policeman’ and his youthful defiance didn’t last long. Under official pressure, Geoffrey named 16 other men, mostly from Taunton, as sexual contacts. On 26th May 1954, they all stood trial with him on indecency charges at the Town Hall in Wells, Somerset. All the men pleaded guilty, hoping for lighter punishments.

The judge, Mr Justice Oliver, said it was appalling that an ancient, historic, not very large town like Taunton should at one assize exhibit as many cases of homosexual crime as in the ordinary way he met within a whole year. The answer was not that the population of Taunton was more debased than other groups of the community but that once vice got established it spread, like a pestilence and unless held in check threatened to spread indefinitely.

In 1954, a witch-hunt of gay men reached its peak. Over 1,000 men were imprisoned across England and Wales. Most did not have the profile to speak out, but the authorities made the mistake of prosecuting some influential society figures, including Lord Montague of Beaulieu, Michael Pitt-Rivers and Peter Wildeblood. The outcry that followed led the the Conservative government to set up a committee to look at the reform of sexual offences in England and Wales.

The resulting Wolfenden Report, published in September 1957, called for the law to be changed to allow consensual sex between men. The Tories promptly kicked it into the long grass. Some of the younger men at the Wells trial were given suspended sentences. Three received probation for two years and two more were sent for separate trials. Three others, including Geoffrey, were bound over for two years providing they accepted treatment at Tone Vale psychiatric hospital.

If Geoffrey’s sentence was harsh, the judge made an even harsher example of the older men. Nine received prison sentences. One of the accused, the defence said in mitigation, was a war hero. He had received the Military Cross during the Second World War. For the judge, this simply made matters worse. Mr Justice Oliver jailed this man for twelve months. Within minutes, the poor prisoner took cyanide, killing himself in a cell below the court.

It was a charged time in gay history. Our Wells war hero would not be the last. Alan Turing took his own life by cyanide just 12 days later, on 7th June 1954. The tragic story of the Wells trial had far-reaching consequences. It nagged away at one local man, Dr Robert Douglas Reid, over the next three years.

Finally, on 3rd January 1958, in despair at the sidelining of the Wolfenden Committee, Reid wrote to The Spectator condemning police blackmail. Robert Reid’s protest letter, a masterpiece of cool calm indignation, called for an organisation to support all those affected by the state’s assault on homosexuals and for a change in the law. At a time when gay men had to hide in the shadows and when some would rather die than publicly own their sexuality, Reid openly signed his name and put his address. He wasn’t hiding.

In the censorious climate of the times, this was a uniquely brave act. Reid had argued for law reform before, in letters to the Archbishop of Canterbury and the Daily Telegraph, but had met with cold and dismissive replies. This time, his words struck home. Reid’s letter produced a flurry of responses and the Homosexual Law Reform Society was founded five months later, on 12th May 1958. It was instrumental in bringing about the longed-for change in the law, a decade later in 1967.

So who was Robert Reid? An Oxford Doctor of chemistry, he held a commission in the Somerset Light Infantry during the First World War. He later became Headmaster of King’s College Taunton, the first non clergyman to fill the post. He was a charismatic character, who significantly boosted the pupil roll and even attracted fashionable royal patronage. A photograph in the school magazine shows Robert Reid welcoming Prince Desta, grandson of Emperor Haile Selassie, as a pupil.

However, Reid was obliged to resign his headship when he faced his own trial in 1937. He was accused of importuning a lad he met at a London cinema. He was bound over for three years. The judge at the Old Bailey accepted his defence that a medical problem ‘swelling of the thyroid gland’ had prompted his behaviour. As part of his sentence, according to the Daily Telegraph, Reid accepted medical treatment: a nameless, unspecified ‘operation’ to correct his condition.

He moved back to his home town of Wells and went on to become a local historian and city councillor. Quite how Reid lived down the scandal that engulfed him in the 1930s is a mystery. The temptation must have been to keep a low profile. But instead, he began campaigning, even giving a 1944 lecture to the Prison Medical Reform Council, advocating homosexual equality. And in 1958, while others were silent, he spoke out.

Robert Reid lived on in Wells until his death in 1982. He became a neighbourhood celebrity, renowned for his local history talks and a book about Wells Cathedral. His obituary in the Wells Journal describes ‘one of the city’s most eminent citizens … tall, distinguished and with a natural vitality.’ Geoffrey survived his stay in Tone Vale Hospital. A census in the 1960s finds him living with another man in Willesden, West London.

Towards the end of the decade, the pair emigrated to Australia. Both Geoffrey and his friend have passed away now but remained together all their lives. They are fondly remembered by their bowls club. Today, trains from Exeter still chug in and out of Taunton. Wells Town Hall no longer holds the Somerset Assize. Its chocolate-box exterior is now the face of the Warlegan Bank in Poldark.

The courtroom where the flirty schoolboy and his co-defendants faced the wrath of Mr Justice Oliver is now a dance studio. The cell where the holder of the Military Cross met his death is a store for the council’s wheelbarrows. Robert Reid had his demons. But his courageous stand sparked a campaign that transformed Britain’s laws and led to the more open, free and equal society we know today.

Martin Malcolm’s play Open Door, about the Wells trial, had its first reading for LGBT History Month 2019 at the library in Taunton, the Somerset town where our story began. Ben Priestley is an independent researcher in post war British social history. This February, for LGBT History Month, OUTing The Past is offering a wide variety of stories like this one on their website, as well as talks and other events across the UK.

You can find all the details at lgbthistorymonth.orgk/presenters