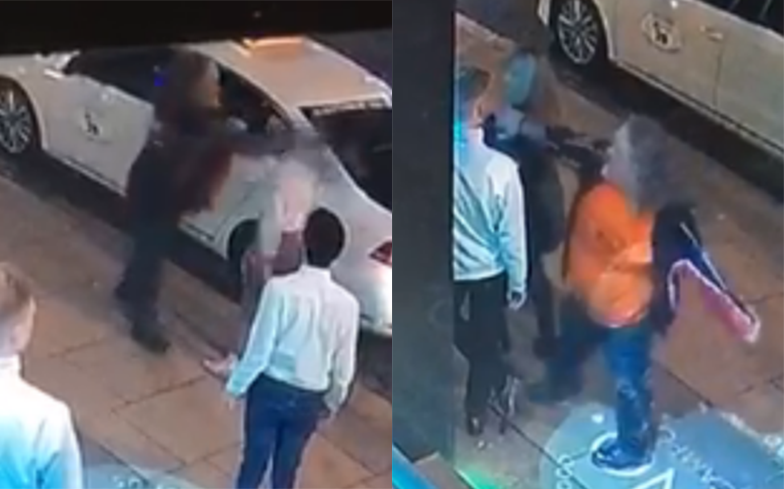 A brave waitress stepped in and was punched in the face “with a haymaker”.

A gay couple and one of their mothers have been left scarred after being brutally attacked by a stranger in Leeds.

On 25 January, Philip Sexton confronted Sarah Liversidge, her son and his boyfriend outside the Gino D’Acampo My Restaurant on Park Ross. After berating them, he pushed Sarah to the side and then punched one of the men in the face.

A waitress later came out of the restaurant to question the man and was also violently punched in the face. Footage shows the brave woman defending herself with several kicks before he runs after her and viciously pulls at her ponytail.

“It really shocked us, they were just stood there chatting and having a cigarette,” he said. “He pushed my wife out of the way, and then went for the boys. He also hit the waitress with a haymaker when she intervened.

“Her nose was bruised and her face was covered in blood, but she was still giving him some stick.”

The couple were introducing their parents to each other for the first time as part of a birthday celebration.

“The assault has had a huge effect on all three victims. We are not from Leeds and will never return,” continued Ross. “What should have been a really happy event ended in violence and upset. It’s been a horrific time for us.

“The boys have found that the attack has completely changed them and they are nervous about going out.”

Sexton managed to avoid jail time. Although he pleaded guilty to four charges of assault at Leeds Magistrates Court on 19 February, he received a 12-month community service order and has been ordered to carry out 100 hours of unpaid work.