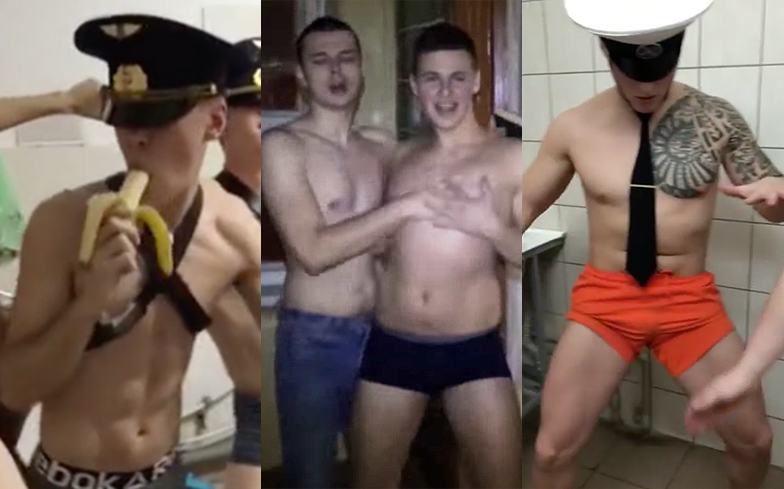 Now here’s a viral challenge we can get behind.

Earlier this month, a group of Russian air cadets landed themselves in hot water after a video of them dancing to Benny Benassi’s 2002 hit Satisfaction in underwear and bondage gear took the internet by storm.

In an ode to the song’s original music video, the cadets played the roles of mock construction workers, occasionally taking breaks to seductively eat bananas, twerk on chairs, iron clothes, clean windows and do push-ups.

But the video was just too homoerotic for the Ulyanovsk Institute of Civil Aviation, which is the oldest civil aviation school in Russia, as local media outlets reported that an investigation of the clip had been launched.

“Honestly, I do not want to comment on this disgusting behaviour,” said Petr Timofeev, head of the institute’s campus administration department, at the time.

“I have worked here for 20 years and this is the first time I have seen anything like this. It is so offensive. We invest so much into these people and this is how they behave.”

While the cadets’ institute may not have approved of the video, they’ve received immense support elsewhere.

Fellow Russians including construction workers, emergency service employees, and students in their dorms have started to film their own versions of the Satisfaction music video, all in various states of undress.

See some of the parodies below.

But it’s not just fit young men who are jumping on the challenge, as a video of Russian pensioners showing off their best twerking skills has also gone viral, receiving over 400,000 views since it was posted on 21 January.

Homosexuality is not illegal in Russia, but thanks to widespread anti-gay propaganda and laws against the promotion of ‘non-traditional relationships’ to minors, the majority of the country have a poor view of LGBTQ people.

The poll – which was conducted in December – exposed a massive spike in anti-LGBTQ attitudes in the country, with little distinction between generations when it comes to views on same-sex relationships.

In Russia’s urban and rural areas, just 8% of the 1,600 people surveyed did not object to gay sex.

“Our reports confirms the fact the level of homophobia and level of violence against LGBT people is growing in Russia,” a spokesperson for the Russian LGBT Network told GSN.

“I do not believe that the Russian society is homophobic by its nature – it is exactly the work of the state-sponsored propaganda.”

They added: “The Russian government is actively promoting the so-called ‘traditional values’ that presents homosexuality – and many other things – as alien for Russia.

“The same report of Levada Center shows that more people than before condemns sexual relations outside of marriage or abortions. All in all, this data is very frightening.”