HIV testing campaign Me. Him. Us. returns to the streets of London 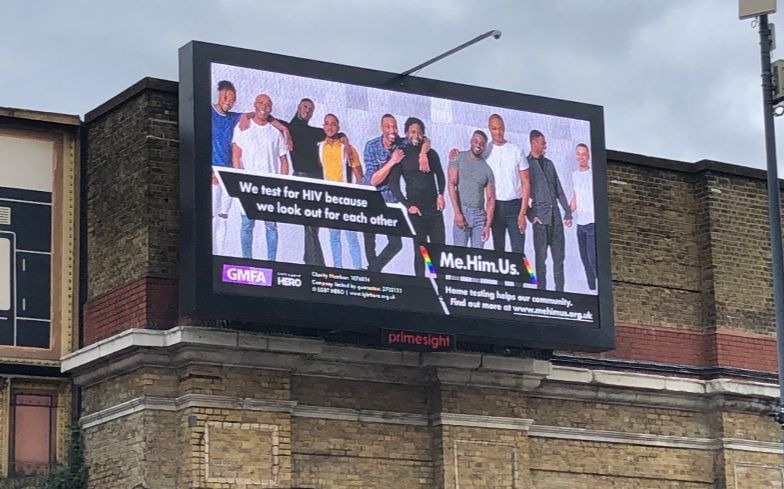 The campaign which launched last year has returned again.

After the success of its first campaign, the GMFA have launched the second phase of their Me. Him. Us. initiative, which aims to get more black gay men tested for HIV.

This second phase is focusing on community, representation and home testing. The campaign features 17 young black gay men who wanted to make a positive change in their community, as well as to better represent black gay men in sexual health campaigns.

Gus, 24, is one of the stars of the campaign, and he said: “I originally wanted to do the campaign because it’s something fresh and new. You don’t see it every day. It’s nice to finally be represented in a positive way.

“Usually you don’t see black men in a photo shoot or a campaign when you’re walking down the street. It’s refreshing to be shown in a positive way too, and not just seen in a negative stereotype.

“It’s something beautiful to be a part of, knowing that we are helping to effect a change.”

Tre, 19, another star of the campaign said: “It was empowering to be surrounded by so many young gay black men who are so passionate about spreading awareness of HIV testing.

“Everyone who took part in the shoot came from a variety of different backgrounds and it’s powerful to see the representation of people from the gay black community from all different parts of the country as well.

“I think it’s really important for young gay black men, especially for people who might be struggling with their own identity, to see people that look like them on billboards and social media, talking about the important of getting tested.”

Phil Samba, who starred in and helped develop last year’s campaign, said: “It’s important for us black men to take care of our sexual health and get tested regularly because sadly we are disproportionately affected by HIV.

“We deserve to have the sex we want, which is right for us, with the least amount of harm. If other queer men are the main source of sexual health information for queer men, it is extremely vital that we all teach ourselves and others about all the preventative tools available today, how they work and how to access them.

“Black queer men especially need to be able to have open and honest conversations destigmatising sexual health among themselves and their friends from different backgrounds.”

Marc Thompson, the co-editor of BlackoutUK, and helped advise on both last year and this year’s campaign, explained why he returned, saying: “The reason I took part in Me. Him. Us. again was to build on last year’s success.

“The first Me. Him. Us. campaign focused on the role of the individual, but with the new campaign we have a larger group of men, so it was really about stressing the importance of community involvement and how we can all play a part in ending HIV.

“The day of the photo shoot was powerful and moving. We had 17 black gay men who came together to make a difference in their community. They wanted to make sure that their diversity was represented.

“It highlighted that the needs of black gay men, and the fact we are disproportionally effected by HIV, is still at the forefront of the work we do. Leading these campaigns and being represented is still incredibly important.”

Ian Howley, the chief executive of LGBT HERO, which is the parent organisation of the GMFA, said: “When Me. Him. Us. launched last year we saw something I have never seen in HIV prevention.

“There was a movement behind Me. Him. Us. black gay men felt emotionally connected to this work and helped us spread the campaign’s important message about looking after your own health, your partner’s health and your community’s health to over five million people.

“So, I was delighted that we were able to continue this important work in partnership with black gay and bisexual men.

“These men deserve more than one-off campaigns or to be involved in a tokenistic way without any say. And they deserve to create work that is by them, for them, and empowers their community.

“I hope that through GMFA, LGBT HERO can continue this successful partnership for years to come.”

The campaign will feature on a digital billboard in Lambeth, and in digital advertising hubs across East London during the Summer.

For more information about this campaign or to order a home HIV test visit www.mehimus.org.uk.