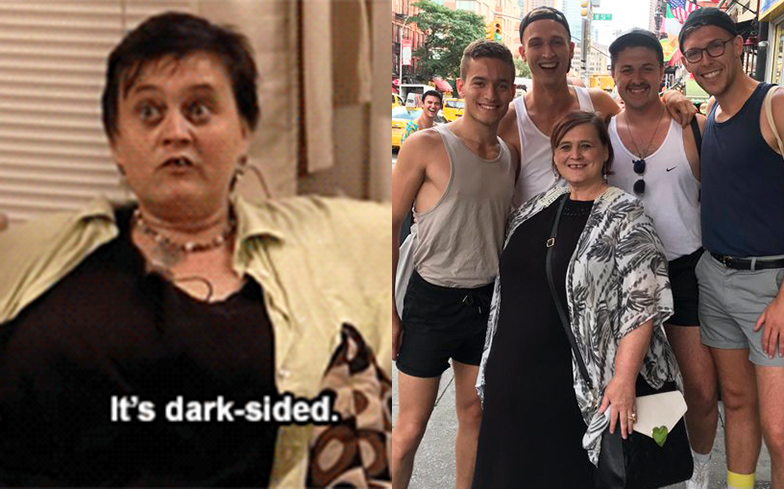 The God Warrior is an LGBTQ ally, confirmed.

Marguerite Perrin first entered the public conscience when she appeared on Trading Spouses – that’s basically Wife Swap to UK readers – a show where two families of different backgrounds or beliefs swap wives or husbands for a week.

She famously had one of the biggest meltdowns in reality TV history during her episode, accusing the other family of being “dark-sided” and proclaiming herself to be a “God Warrior” – an iconic speech which people still quote to this day.

Marguerite may have left the spotlight for a long time following her appearance on Trading Spouses, but she never left our minds.

Then, earlier this year, she became 2019’s most unlikely LGBTQ icon.

Over summer, she began popping up across our social media timelines waving rainbow flags and posing for photos with people celebrating Pride, and told one fan: “Never stop being true to yourself, and never stop screaming.”

In a new interview with Esquire, Marguerite has revealed the surprising and incredibly heart-warming reason she embraced the LGBTQ community and became a supporter.

In 2007, her eldest daughter Ashley died in a car accident. It left her heartbroken, and while her close friends didn’t know how to talk to her about what had happened, the gay community stepped up, offering condolences and notes and flowers.

“I have to tell you, I was in my bedroom. I was not getting out of bed for the longest time,” she explained.

“[The gay community] weren’t scared to talk about me losing Ashley and saying I’m sorry to hear about that. I was pretending like I was happy and I was okay. They would not leave me alone.

“You couldn’t help but talk to them and be okay with them. The people that write those little memes and do those little things, I love that. That’s what got me out of bed after Ashley’s death.”

Marguerite then recalled an encounter with gay fans as she left a church in New York City over the summer.

They said to her, “We wanted to tell you we we’re so happy to see you in New York and we want to tell you we’re very sorry to hear about your daughter Ashley,” and she asked them for a hug for still remembering her daughter.

Marguerite, who is currently working on a new reality series that places her in ‘uncomfortable cultural situations’, also addressed the memes people have made of her over the years, confirming she loves them.

“You know that kind of stuff, that actually makes my day. It makes my day. That’s not mean spirited, they don’t mean it in any kind of way,” she said.