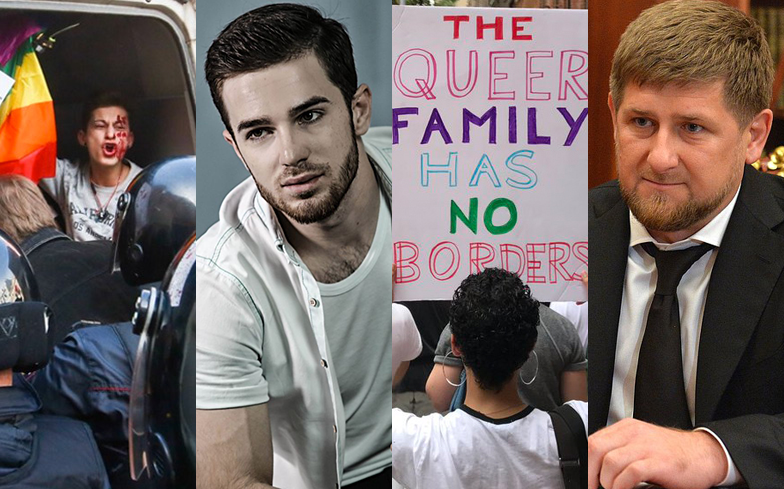 Here we break down what has happened so far.

What is happening in Chechnya?

Detainees who were either released or managed to escape have since told Novaya Gazeta of the trauma they faced while imprisoned. Some say they were tortured, while others say they saw prisoners beaten to death.

“They kept our phones switched on. Any man who calls or texts is a new target.”

Describing how he was beaten with a plastic pipe, he added: “They always hit us below the waist – on the thighs, the buttocks, the loins. They said we were dogs who had no right to life.”

A 30-year-old man named Ruslan came forward to speak of his experience during the anti-gay purge, and revealed that he was outed to his family when his daughter-in-law discovered text messages he had sent his boyfriend on his phone.

His own family swiftly took away his passport and phone, and locked him in his room for a month.

“In Chechnya there was a big cleansing of gays. People working for Kadyrov (Chechnya’s leader) would target one (gay) person and through blackmail and beating would force him to surrender others,” Ruslan told BBC Russian.

“Some were caught, taken to the cellars, beaten violently, others were not found. Relatives sometimes did not even look for them, as they wanted to wash away the shame.”

Who are the most high profile casualties?

Russian singer Zelim Bakaev has been missing since 8 August, 2017. He was reportedly bundled into a car back after landing in Grozny – Chechnya’s capital city – to attend his sister’s wedding.

Activists came together in New York City last August to mark the anniversary of his one year disappearance.

Since his disappearance, both the Chechen and Russian authorities have denied knowing anything about his whereabouts. Chechen leader Ramzan Kadyrov later claimed that Zelim was killed by his own family for being gay, but that has been denied by his closest ones.

Last year, chilling reports of young gay men being murdered by their own family members also came to fruition, as authorities told parents to kill them – or they’ll do it themselves.

What is Russia doing about this?

Kadyrov publicly declared that he wanted all LGBT+ people in the country to be eliminated by May 26 2018, which marked the start of Muslim holiday, Ramadan.

Alvi Karimov, the spokesperson for Ramzan Kadyrov, told reporters that the reports were “complete lies and don’t have an ounce of truth in them.”

Dzhambulat Umarov, the Minister of National Policy described the reports as “fantasy” and added: “Considering the fact that they [gay people] have sick imaginations to start from, I am not surprised that they can write nonsense like that.”

How have the international community reacted?

The Human Rights Campaign have given repeated calls for Donald Trump to publicly condemned the Russian Republic’s actions.

They want the US president to “end his deafening silence” on ongoing crimes against people suspected of being LGBTQ in the country. “These atrocities constitute crimes against humanity… None of the perpetrators have been brought to justice,” they have previously put in a letter to the White House.

“Russia has refused to launch an investigation, and those who carried out these abuses face no repercussions for their actions. You must condemn these crimes against humanity and call on Russia to conduct an investigation and hold the perpetrators accountable.” It took the US Senate seven months to condemn the brutal purge that is still continuing today.

“The Senate condemns the violence and persecution in Chechnya and calls on Chechen officials to immediately cease the abduction, detention, and torture of individuals on the basis of their actual or suspected sexual orientation, and hold accountable all those involved in perpetrating such abuses,” they said.

It adds that the US government should “continue to condemn the violence and persecution in Chechnya, demand the release of individuals wrongfully detained, and identify those individuals whose involvement in this violence qualifies for the imposition of sanctions.”

In a letter to Labour MEP Seb Dance, UK Prime Minister Theresa May responded to a plea from a cross-party group of politicians and human rights organisations by acknowledging the “deeply troubling issue” facing the LGBTQ community.

She wrote: “Officials from our Embassy in Moscow have raised our concerns at a senior level with the Russian Ministry of Foreign Affairs, and are exploring possibilities for a joint démarche with our international partners in the country.

“Urgent action is also being taken to explore how best to provide support to the LGBT+ community in the region.”

Writing on Twitter, Foreign Secretary Jeremy Hunt wrote: “If this is true, it is totally unacceptable & Russian authorities must not only stop this from happening but hold those responsible to account.”

Certain countries – such as Canada, France –  have accepted asylum seekers from Chechnya.

“The first gay Chechen refugee arrived on French land,” Joël Deumier told FranceInfo. “So France has started to welcome Chechen refugees. This is going to continue.”

Canada gave asylum to 22 gay refugees in Chechnya in the same year. Foreign Affairs Minister Chrystia Freeland has been at the forefront of the operation, and the refugees are now residing in Canadian cities.

Has the LGBTQ crackdown started again?

Last month, two more people were reported to have been killed and a further 40 have been detained.

Much like the first wave of persecution back in 2017, police threatened the victims’ families with violence if they spoken out about the crackdown. Authorities have also reportedly taken documents from the prisoners so they cannot escape the region while being held at a jail in the town of Argun.

Igor Kochetkov – programme director for the Russian LGBT Network – said: “The persecution of men and women suspected of homosexuality never ceased. The only thing that has changed is its scale.”

How can I help?

Non-governmental queer rights organisation, The Russian LGBT Network, have been in effect since 2006 to help protect those who face discrimination for their sexuality and gender identity. You can donate via their website here.

Remember, if you have a voice or a platform and there are rallies, protests, demonstrations or fundraisers taking place, help promote, turn up, and be an active part of keeping the conversation at the forefront of people’s minds.

Activist groups like Voices 4, All Out and The Peter Tatchell Foundation are routinely organising protest events, so give them a follow and help them spread the word.