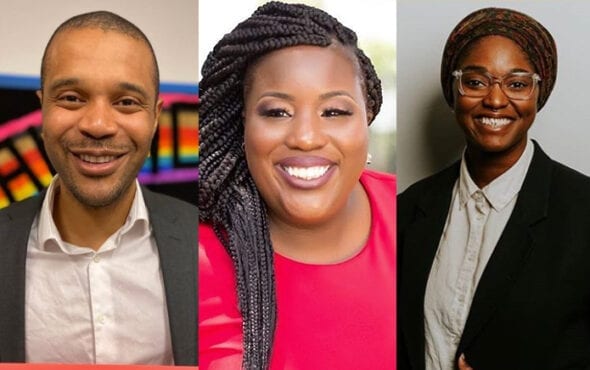 Meet the diverse LGBTQ+ political pioneers changing the face of American history in the 2020 election.

This year’s US election may have been more anxiety-inducing than any in recent memory, but among all the nail-biting drama we’re some history-making moments for LGBTQ+ candidates.

The 2020 US Election provided a number of first across numerous states, increasing representation for LGBTQ+ people in positions of power.

Here’s a breakdown of what we know so far:

Rayner-Goolsby contined to say: “We’ve run a campaign focused on putting people over politics and that’s rooted in a commitment to working with and for residents until the change they seek is a reality,” she said. “This win proves that this community is…tired [of] business as usual and ready for change, and I’m so grateful and humbled that the voters of District 70 have elected me to represent them in Tallahassee to move us closer to the change we all deserve.”

I’m the first openly Black queer women ever elected in Florida-at any level.

Our team was led by a Black woman. It was anchored by women and women of color. We won because we defined ourselves for ourselves.

GOTV things in Manatee and Sarasota.

I will continue making the case for @JoeBiden and our democratic down ballot candidates until November 3 at 7pm. #BidenHarris #vote pic.twitter.com/J6oiJFu5fG

Shevrin Jones has also made history as the first openly LGBTQ+ state senator in Florida. While Jones did not face a Republican in the race, he did outperform Democratic opponents.

Jones came out in 2018 and has served in the House of Representatives since 2012. Posting online, the Florida senator thanked those who went out to vote. “I’m humbled to have earned the trust of the people of SD 35. I am looking forward to serving you in the Florida Senate. Thank you!”

Started the morning off voting with my Dad. #VOTE pic.twitter.com/NDsR98Atv1

Claiming 41% of the vote, Taylor Small Small ran as both a Democrat and a Progressive. Addressing her win, Small wants to use her new platform as a point of representation and change. “When you bring folks that have marginalised identities that aren’t typically seen in positions of power,” she said. “It allows those most impacted to be at the forefront of those bills, and understanding the legislation we are making goes beyond ourselves, but is truly community-oriented and focused.”

Bernie recognizes that young people have the power to change this country and the world. I am grateful for the support of @BernieSanders and am proud to carry the torch as we continue the fight for health equity, climate justice, and income equality. #vtpoli pic.twitter.com/jzvA2I5X4i

Jabari Brisport is the first openly LGBTQ+ person of colour to be elected to the New York State Senate, after running uncontested by an opposing party on Tuesday.

“My first interaction with the NY State Senate was trying to get them to pass same sex marriage around 11 years ago, and when it didn’t pass I really felt like I wasn’t being seen as a person, I felt like I was a second class citizen,” Jabari said on Tuesday. “It’s important to me that people like me, other queer people of colour, feel like they’re seen and feel like they’re represented in NY politics.”

A beautiful day to visit the homes of billionaires in the Hamptons with @marcelaforny. The socialists are coming for your purses. 😈 pic.twitter.com/xXOiIUcShK

We’ve got another progressive success to add to our list and it’s Kim Jackson. Jackson will be the first openly LGBTQ+ person elected to the Georgia State Senate and will be the third LGBTQ+ woman to serve as state senator when she’s sworn in after earning nearly double the votes of the Republican incumbent. Moreover, Jackson is the first out person of colour to be ordained in the Episcopal Diocese of Atlanta.

Jackson’s key campaign policy is to propose a “comprehensive anti-discrimination bill,” which would include sexual orientation, gender, religion, and ability. Right now, Georgia doesn’t have codify these identities in any anti-discrimination law on the books. Following the news of Marjorie Taylor Greene aka the pro-conspiracy theorist landing a seat in Congress, the news of Jackson’s win couldn’t have come at a better time.

Mauree Turner is an example of how far some branches of politics have come. Turner is the first non-binary Muslim Oklahoma state lawmaker.

“Oklahomans have representation that doesn’t have our shared lived experience — that hasn’t been in a family that had to live off SNAP benefits, [or] a single-parent household because one parent was incarcerated.”

Tomorrow is the Day.

Let's go get this seat, y'all.

Nothing About Us Without Us 💛 pic.twitter.com/Ve1F8ExlLh

Say hello to the first openly transgender person to be elected to the US state senate. Sarah McBride has made history after winning for the Democrats in Joe Biden’s home state of Delaware at just 30 years old, making her highest ranking transgender public official in the United States.

Ended the night right where so much started – my old middle and high school, Cab Calloway! pic.twitter.com/M1FnV5Pnlh

Torres is the first openly gay and Afro-Latinx member of congress. After his win, Torres released a statement emphasising his commitment to the public. “Tonight, a new era begins for the South Bronx. It is the honour of a lifetime to represent a borough filled with essential workers who risked their lives so that New York City could live.

“My pledge to the district is simple: I will fight for you. The Bronx is my home, it is what made me who I am, and it is what I will fight for in Congress. I thank the voters of the South Bronx from the bottom of my heart for the trust they put in me to represent them.”

It’s official. We won! It is the honor of a lifetime to be able to serve our community in Washington DC. The counting took longer than expected, but today the @BOENYC certified our victory & I want to say thank you.. pic.twitter.com/j2ygMbQXSA

Torres and Jones share a joint milestone in becoming the first Black and Afro-Latino congressmen. Jones has established reputation in government having worked in the US Department of Justice under Barack Obama. The newly appointed New York congressman snatched victory from Republican Maureen McArdle Schulman.

My grandmother used to clean homes in Congers. When daycare was too expensive, she took me with her. Now I get to run to represent the same people whose homes I watched my grandmother clean growing up.

My story, quintessentially, is that of the American Dream. #NY17Votes pic.twitter.com/PyHknx6xvL