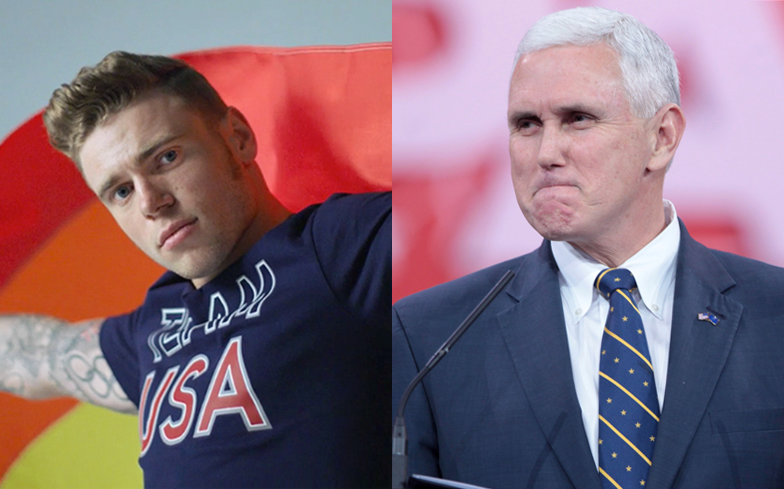 The shade is knee deep…

Gus Kenworthy has thrown some major shade at Vice President Mike Pence in a tweet informing fans of his broken thumb.

The out athlete – who won the 2014 Olympic silver medal in freestyle slopestyle skiing – revealed his injury with a picture of the broken bone, and said it won’t stop him from competing.

“Broke my thumb yesterday in practice. It won’t stop me from competing (obvi) but it does prevent me from shaking Pence’s hand so… Silver linings!” he said. “Will be giving my teammates (and literally everyone else) an enthusiastic “thumbs up!” of encouragement the rest of the trip.”

Considering Pence’s terrible track record when it comes to LGBTQ rights, it’s more than understandable that some of the openly gay athletes competing at the Winter Olympics were less than impressed by his role as leader of the US delegation.

Earlier this week, Gus and fellow out athlete Adam Rippon shared a kiss in defiance of the Vice President (below).

Gus shared a photo of the moment, and captioned it: “The Opening Ceremony is a wrap and the 2018 Winter Olympic Gaymes are officially under way!”

He added: “I feel incredibly honoured to be here in Korea competing for the US and I’m so proud to be representing the LGBTQ community alongside this amazing guy.”

Broke my thumb yesterday in practice. It won't stop me from competing (obvi) but it does prevent me from shaking Pence's hand so… Silver linings! Will be giving my teammates (and literally everyone else) an enthusiastic "thumbs up!" of encouragement the rest of the trip. pic.twitter.com/XylPPGAq9P

But he couldn’t end the post without making a sly dig at the notoriously anti-gay Vice President.

“Eat your heart out, Pence,” he added. Like we said, the shade is knee deep… For good reason, of course.

Back in December, Gus told TIME that, if invited, he would refuse a visit to the White House. This Winter Olympics is the first Gus will be competing as an openly gay athlete after he came out in an interview with ESPN in October 2015.

The 2018 Winter Olympics is currently taking place in PyeongChang in South Korea from 9-25 February.

Related: Gus Kenworthy breaks down in tears over the pain of hiding his sexuality.