Gus Kenworthy had the perfect response to a homophobic Twitter troll 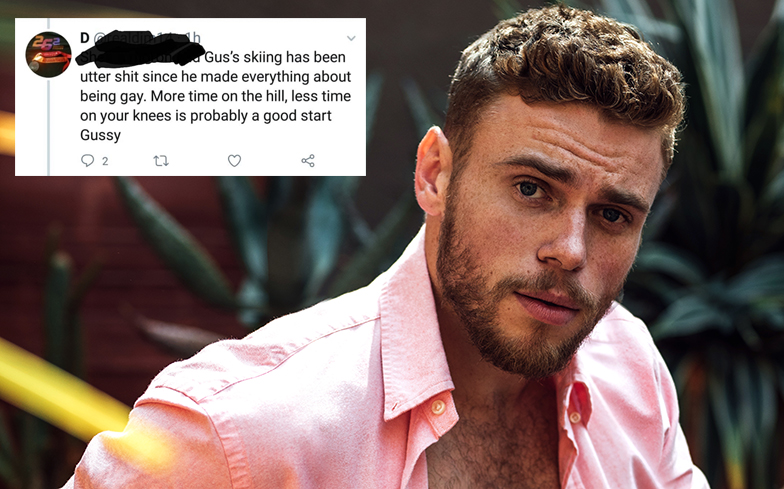 Gus Kenworthy is not here for your homophobic trolling.

The Olympic medal-winning freeskier and soon-to-be actor has made a habit of taking down trolls over social media – he’s even got a story dedicated to it on his Instagram – but his latest is one of our favourites.

“Gus’s skiing has been utter shit since he made everything about being gay. More time on the hill, less time on your knees is probably a good start Gussy,” wrote one Twitter user, who’s since made their account private.

Not one to take a hit lying down, Gus decided to remind the troll of all his achievements as an athlete.

“In the three-ish years since I’ve come out I’ve won the Dew Tour, the European Open, won 4 X Games medals, won a Grand Prix, defended my World Champion title and qualified for my second Olympics,” he wrote.

“So, I’d say the only thing that’s “utter shit” is your fact checking…”

Honestly, we’re not surprised the troll in question locked their account.

Elsewhere, it was recently announced that Gus is set to make his acting debut in the ninth season of American Horror Story, and he’ll be playing the on-screen boyfriend of a fan favourite on the show: Emma Roberts.

Emma and Gus are the first two cast members confirmed for the highly-anticipated follow-up to the show’s eighth season, Apocalypse, which received acclaim from fans and critics. It’s presumed to air in the fourth quarter of this year.

Check out 12 cast members from American Horror Story that we hope will be making a comeback for season nine, and here’s eight potential themes we’d love to see the show explore.