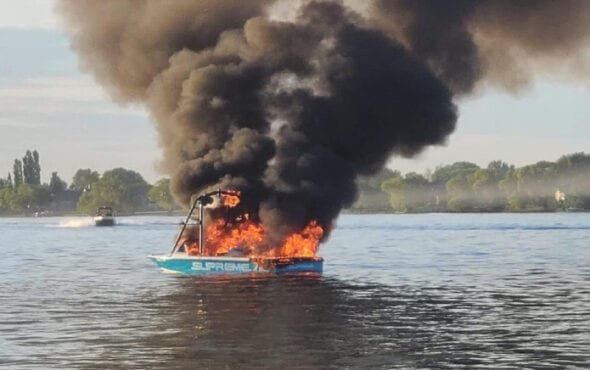 It turns out that karma is real after all!

A group of homophobic bigots had their boat burst into flames after shouting anti-LGBTQ+ slurs at another boat who showed their support for Pride Month with a rainbow flag.

On Memorial Day weekend, TikTok user @uhuhbigboi shared a video with the caption, “Karma hits boaters who harassed and spun circles around our boat after they saw our Pride flags.”

The video, which has gone viral on the social media platform with over seven million views, shows the hate group being forced into the water and rescued by the very people they were targeting.

Twitter user @retro_ushi_, the trans and queer sibling of the aforementioned TikToker, shared more details in a tweet, in which they wrote: “These people harassed my family because we were flying gay Pride flags in Moses Lake, Washington, by racing around us and shouting gay slurs. Then, their boat literally blew up! #KarmaIsReal.”

They believe the boat blew up “because they were driving around us so roughly, they either damaged their carburetor or took in water and stalled. Then fumes built up and when they tried to speed away, the fumes ignited.”

After someone asked how their conversation went once the group of bigots were helped onto their boat, they said: “You mean the screaming and crying that victims do when they throw a rock at the wall and it bounces back? She was hysterical.”

Their tweet has also gone viral, amassing over 60,000 likes and 14,000 retweets. Later, they added: “And just ONE more tidbit to really drive the karma in there. The driver literally shit his pants and everyone saw when his shorts fell off in the water.”

Video of the event pic.twitter.com/JYLqulzqea

While social media users celebrated the video and the “karma of it all”, @retro_ushi_ explained how the event impacted them and their family.

“I also want to show the fear this event has put into my family. To where we literally start filming everyone who even pulls up close to us now,” they wrote. “I’m surprised the camera isn’t shaking because my hands definitely were. That’s my brother speaking in the video.”

I also want to show the fear this event has put into my family. To where we literally start filming everyone who even pulls up close to us now; I'm surprised the camera isn't shaking because my hands definitely were. That's my brother speaking in the video. pic.twitter.com/fgEf9wqs0l

Despite this, the family continued to showcase their support for the LGBTQ+ community by flying the Progress Pride Flag on another boating trip. It’s a phrase that has been proclaimed time and time again, but it bears repeating: “LOVE WINS!”

And we're back at it again! We will not hide our #pride pic.twitter.com/Fp9rbCNVmy