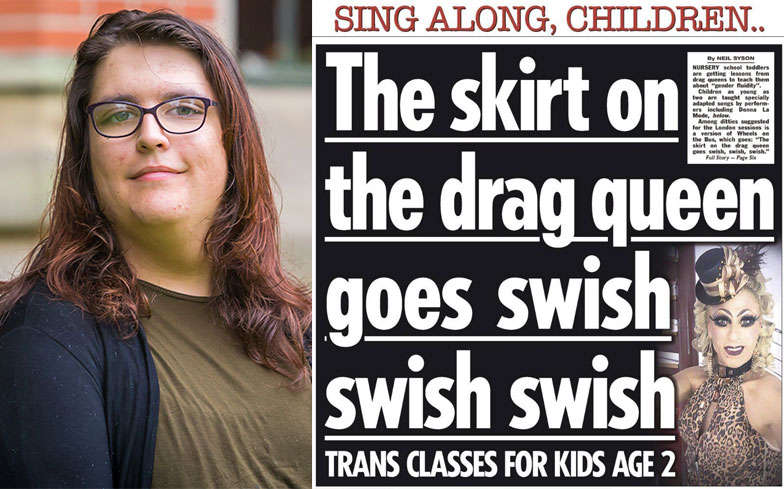 The Green Party / The Sun

“Please will you consider if this coverage has breached the code and if so, take action against the Sun to ensure this does not happen again.”

Aimee Challenor, Green Party LGBTIQA+ spokesperson, has filed an official complaint with press regulator IPSO over today’s coverage in The Sun newspaper on the topic of gender fluidity lessons for toddlers.

She has accused The Sun of breaching the Editors’ Code of Practice by discriminating against trans people with its headline, “The skirt on the drag queen goes swish swish swish.”

The Sun front page story reveals supposed plans for school toddlers to be given lessons to drag queens to teach them about gender fluidity.

Related: Transgender individuals are being pushed to the back of the ‘needs’ list

Aimee said: “The Sun’s coverage of gender fluidity classes is a sad mix of scaremongering, discrimination and inappropriate jokes about drag queens. On the same day the Church of England issues guidelines to help prevent transphobic bullying, it’s appalling that one of our national newspapers is perpetrating such harassment.

“The rates of suicide and self-harm for young trans people are staggeringly high and it’s simply immoral for the Sun to feed into the prejudice towards them.

“We should instead be welcoming the move to improve understanding and inclusivity by talking to children about gender fluidity from an early age.”

Aimee Challenor’s official complaint, made to the IPSO, reads:

I wish to make a complaint under the Editors’ Code of Practice relating to the Sun’s coverage on November 13, 2017. I believe the Sun has breached clause 12 by publishing prejudicial and pejorative coverage of ‘trans lessons’ for children.

The paper’s front page headline ‘The skirt on the drag queen goes swish swish swish: Trans classes for kids aged 2’ pokes fun at the issue and ignores the very serious reasons why talking about gender fluidity from an early age are so crucial.

The article itself treats drag queens and the concept of gender fluidity lessons with contempt. The coverage is not only sensationalised but blatant scaremongering about the influence drag queens will have on toddlers.

We live in a society where eight out of 10 trans young people have self-harmed and almost half have attempted to kill themselves. When our national newspapers publish attacks on the LGBTIQA+ community they are fostering a wider climate of hostility, fear and aggression towards us.

For this story to be published on the same day as the Church of England publishes guidelines to prevent transphobic bullying – which the Sun has also reported on and is well aware of – shows just how necessary these steps to prevent bullying are.

Please will you consider if this coverage has breached the code and if so, take action against the Sun to ensure this does not happen again.

More information on The Green Party can be found here.