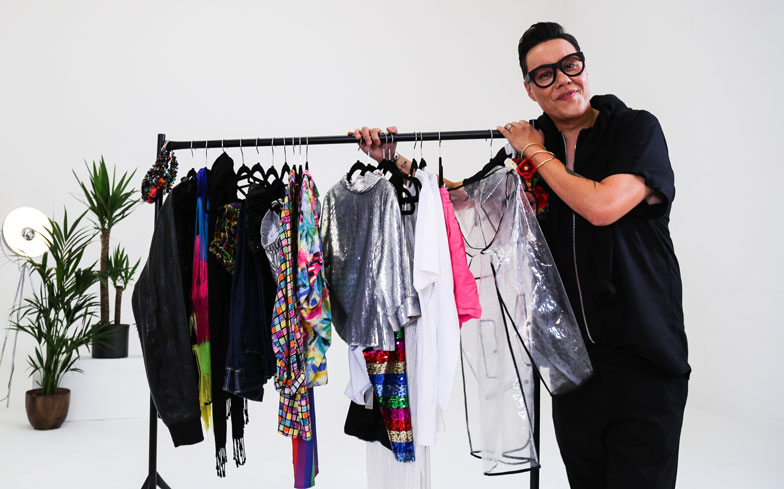 Ahead of Pride in London this Saturday, Gay Times and LGBTQ movement All Out have teamed up with celebrity stylist Gok Wan to campaign for a Global Pride Makeover, raising awareness of the prejudice and violence faced by the LGBTQ community around the world.

In the exclusive film, created especially for this year’s Pride week, Gok dresses a group of people looking for their perfect Pride outfit that they can wear anywhere in the world. However, in an unexpected twist, each must have an item that represents the persecution faced by members of the LGBTQ community globally.

These must-have items featured in Gok’s Global Pride Makeover include:

• A distressed leather jacket: An essential item as a protective layer for Pride in Istanbul last week (and in 2017) when police fired rubber bullets into the crowd.

• Makeup wipes: An essential item at Pride in Uganda in 2016, where brave individuals breaking gender boundaries were arrested and sexually assaulted by the Ugandan police.

• A black woollen hat: An essential item for those in Indonesia this year, where trans individuals with long hair were rounded up by police and had their hair forcibly cut. Despite an acceleration in LGBTQ equality in the UK over recent years, the community still faces discrimination across the globe every day. According to All Out, in more than 70 countries it’s a crime to be gay. In 10, it can cost you your life. In no country in the world are LGBTQ people treated fully equally.

“We created the #GlobalPrideMakeover to raise awareness for equality around the globe, and just how fortunate we are here in the UK to take part in a Pride parade, have parties and march without a fear for our lives – unlike some of the countries that we mention in this film,” explained Gok.

“This film does not hide away from the message: this is probably one of the most honest things I’ve ever done. I ask every single person to not only watch this video, but also to share it among their communities and friends, school and colleagues at work.”

Gay Times and All Out are asking the public to share the film on both Twitter, Facebook and Instagram, and add their voice to the fight for global love and equality by signing up at allout.org/pridemakeover and using the #GlobalPrideMakeover hashtag.

Matt Beard, Executive Director at All Out, said: “Every single day, people face violence, jail time, death threats, or worse, just because of who they are or who they love. As a global movement for love and equality our aim is to mobilise thousands of people around the world to stand up for LGBTQ+ rights.

“Through our partnership with Gay Times we continue to fight for a world where no one has to sacrifice their family, freedom, safety, or dignity because of who they are or who they love.” William Connolly, Editor of Gay Times, added: “All Out is a global initiative devoted to the liberation of queer people no matter where in the world they live. As we approach Pride in London, we at Gay Times have been reflecting upon how fortunate we are to be in a city that not only sees us equal in the eyes of the law, but also provides a safe space and platform for the varying identities within our community to celebrate openly and freely. Sadly, this is far from true elsewhere in the world.

“We’re proud to partner with Gok Wan and All Out to deliver this campaign, which will hopefully raise awareness of the hardships that many LGBTQ people endure. We should feel uncomfortable upon hearing about these things, and must not allow our celebration lead into complacency.”

For further information on this campaign or to donate to All Out, please visit allout.org.