Gender identities, obstacles and allies: We’re in this together, remember? 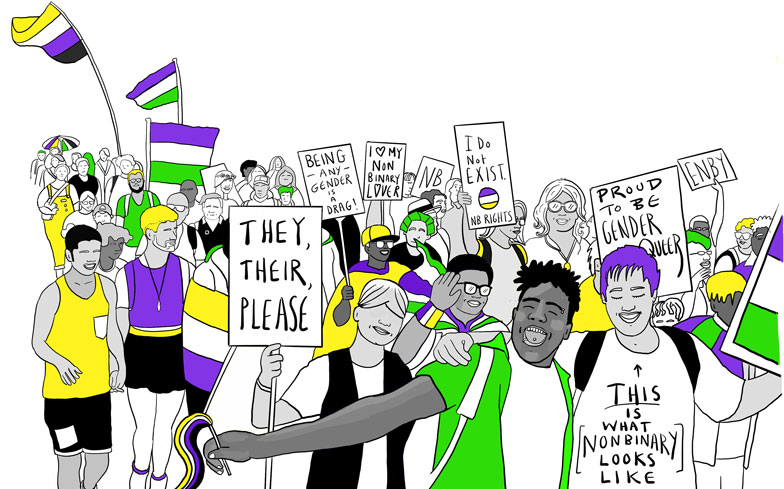 Most people in society today understand what it is to be a trans woman or a trans man.

Despite the rise in awareness of trans issues in the last few years, there is still little knowledge and awareness of the actual diversity of the trans community. The media just usually presents all the classics: Beautiful, white, able-bodied, passing trans people that don’t make anyone feel uncomfortable with their gender non conformity or vibrant gender expression. Trans people are people just like you; not wanting to rock the boat or disturb the perfect, neat and simple bubble of gender conformity… but that’s not the whole picture.

For those that are not fully aware, non-binary people are people that aren’t exclusively men or women. They experience their gender as fluid or fall completely outside of the binary of gender. Being non-binary isn’t necessarily a lack of a gender identity, but they are identities all on their own.

Many people don’t recognise the difference between gender identity and gender expression. The first has to do with your core gender identity, where as the second one has to do with how you express yourself. There’s so many women that present in a masculine way and men that present in a feminine way, so why does everyone assume non-binary people have to be androgynous and not want any form of physical intervention?

When explaining non-binary people and their identities, we’re usually forced to explain what they are not (i.e. not men or women), simply because we lack the language to describe anything that falls outside the very persistent and binary model of gender. We simply lack the ability to speak about gender outside of these binary terms and that remains as one of the biggest obstacles non-binary people face.

In many languages, gender is embedded into nouns and adjectives, which makes it even harder to speak in more neutral terms or use pronouns or descriptors that do not have connotations to the masculine or feminine. Several countries have started mainstreaming gender neutral pronouns into their language and the singular they is becoming increasingly popular in the English language, despite grumpy critics claiming it’s all ‘grammatically wrong’ or ‘political correctness gone mad’.

In most countries around the world, non-binary people aren’t legally recognised. Most countries only allow you to register your gender as a man or a woman on all forms of ID, such as your passport, driving license and birth certificate. Non-binary trans people are therefore unable to have their identities reflected accurately on the ID documents, which is highly ironic as the whole point of an ID is to be accurate. This is slowly changing though, as countries such as Malta, Denmark, Australia and Canada now allow people to have ‘X’ markers on ID documents such as passports.

Related: Rabbi, buttmitzvah and tradition: A coming of age for queer Jews

Another obstacle faced by non-binary trans people (or just trans people that don’t conform to the binary standards in general) is access to healthcare. Some non-binary trans people require access to hormones and/or surgeries in order to feel comfortable in their own skin, others don’t. The same goes for trans women and trans men, and not all require the same services in relation to hormones and/or surgeries to feel comfortable in their own skin.

Healthcare for trans people has historically been focused on the binary model of gender where people take hormones and have surgeries to become ‘the opposite gender’ in a very binary, medical way. This is all tied to a very normative idea that women and men have to be a certain physical features to truly be men or women. And if trans people really are the gender they say they are, then they must also want to be just like every cisgender woman and man out there. So when trans people who don’t fit neatly into this binary narrative come along, they are often denied health care. There isn’t just one narrative that works for everyone, despite all the boring documentaries constantly showing trans people on operating tables.

Being a non-binary person in today’s society is very exhausting. We’re constantly faced with spaces that are gendered for no specific reason. We have to fill in forms to use services or on websites that only allow you to register as a man or a woman. Perhaps the most frustrating thing is searching desperately for a gender neutral title in a drop down menu of about 250 titles which are all inherently gendered. Would it be that hard to add at least one gender neutral title or at least give you a chance not to use one? Who even uses titles anymore?

Some of you might be wondering at this point: Okay, but why should I care? Well, mainly because it’s the decent thing to do. Non-binary people aren’t going anywhere and their existence and the acknowledgement of that certainly isn’t going to erase your identity as a man or a woman. They most certainly pose no threat to anyone else.