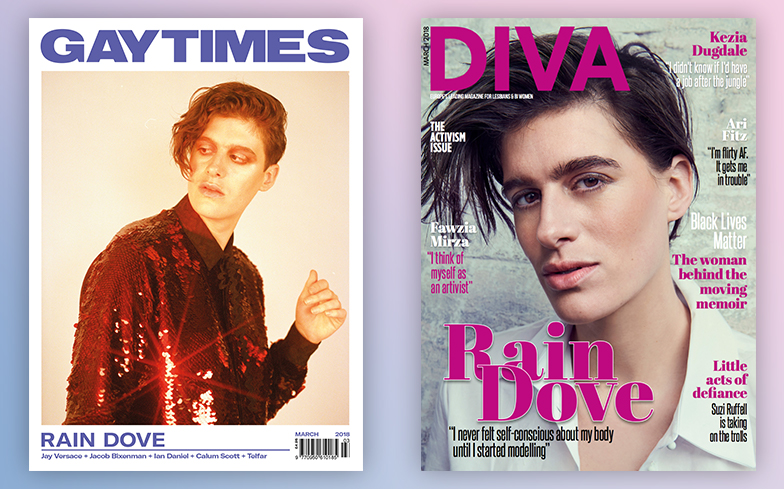 Rain Dove, who does not identify as male or female, will make history by appearing simultaneously on a men’s magazine and a women’s magazine.

In a publishing first, two of the world’s leading magazines for LGBTQ people are synchronising the launch of their March 2018 issues, both of which feature activist, model and “gender capitalist” Rain Dove.

Rain Dove, who eschews labels entirely with their motto “I am I”, has appeared in numerous spreads for magazines like Vogue, Elle and Cosmopolitan, as well as ad campaigns for brands such as Calvin Klein. Famous for modelling both womenswear and menswear, Rain is part of a movement challenging traditional ideas of binary gender.

A former firefighter, Rain dismisses gender, believing it to be a social construct, and when asked which pronouns they prefer says “use what you want”. While others who do not experience themselves as male or female may identify as non-binary, gender-fluid, genderqueer or agender, Rain rejects these labels entirely, instead referring to themselves as a “gender capitalist” – a person who “recognises society’s perception of gender and capitalises on it”.

This is the first time that these two world-leading LGBTQ publications have featured the same cover star simultaneously – a powerful statement of support for gender non-conforming people who are often invisible not only in mainstream society but in LGBTQ life as well.

Carrie Lyell, editor of DIVA, said: “Rain is an incredible person and we are absolutely thrilled to have them on our cover this month. In our exclusive interview, they talk about the importance of pronouns, the impact working in the fashion industry has had on their self-esteem, and the ways in which they are capitalising on society’s perception of gender.

“I am immensely proud of this cover, and indeed the whole issue, which I believe is a game changer. I hope DIVA readers old and new enjoy it.”

William J Connolly, commissioning editor of Gay Times, said: “After a recent rebrand, Gay Times is proud to emerge as a true champion of diversity. Our audience is yearning for the amplification of voices from the far reaches of the LGBTQ spectrum, and our collaborative cover with DIVA represents the genesis of a new era for queer media.”

Linda Riley, publisher of DIVA, said: “I am delighted that DIVA and Gay Times are standing together and acknowledging that those whose gender identity does not fit with the binary are as valid and valued as anyone else in the LGBTQ community.

“The LGBTQ community is a wonderful kaleidoscope of humanity, and featuring Rain on our cover sends a hugely positive message to everyone who might feel they don’t belong. Both DIVA and our friends at Gay Times are proud to celebrate diversity.”

Gay Times publisher James Frost added: “Rain is the embodiment of this new movement for queer people, and we’re proud to share them with DIVA and indeed, the world.”

The March 2018 issue of DIVA is available to download from 10.30am on Tuesday 20 February, and hits newsstands on Friday 23 February – divadigital.co.uk .

Gay Times March 2018 will be available for pre-order on Tuesday 20 February, and then available across newsstands and digital platforms from Wednesday 28 February – gaytimes.co.uk/buy .