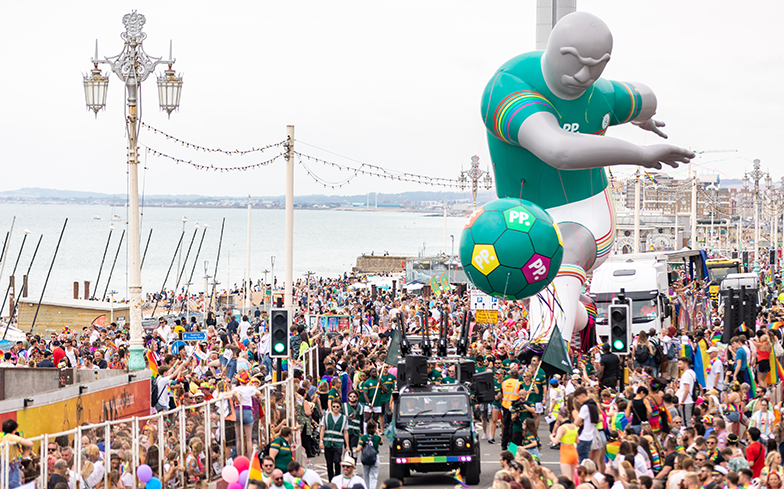 The Game Changer reached a height of nine meters. Think it made an impression?

For this year’s Brighton Pride, GAY TIMES partnered with Paddy Power to highlight the lack of visibility for LGBTQ footballers.

Before Kylie Minogue sashayed on stage to perform some of her biggest hits – from Can’t Get You Out of My Head to All the Lovers – the largest inflatable ever used at a Pride Parade in the UK made its mark on the city.

The Game Changer balloon was held by Liverpool legend Graeme Souness and Proud United – a team made up of LGBTQ footballers from across the nation – to draw attention to the lack of openly gay male footballers.

“Society has made such giant strides generally in terms of LGBTQ, that as football people we’ve got to ask why does the issue of homophobia persist within our community and the professional game and challenge that,” said Souness.

“I’m here today as an ally and to bring attention to members of the LGBTQ community in the amateur game who are leading the charge in that conversation.”

Souness is a heavyweight in professional football, after playing for numerous Premier League teams throughout the 1980s and going on to manage world-class teams after his playing career.

After retiring from management he launched a successful media career and is currently one of the main analysts on Sky Sports’ coverage of the Premier League.

This position means he has been an active member of the professional football community spanning more than five decades and has seen the sport change over time.

However, he admits that the one thing that hasn’t moved is the attitude towards an openly gay player at the professional level and the culture of homophobia in the stadiums.

“Homophobia in football, I think, still exists every bit as much as it did on the first day I walked into a professional football club, which was in the late 60s,” Souness explained.

“When you think of how society has come on leaps and bounds in improving the situation for the LGBTQ community, football hasn’t. We’ve stood still.”

Souness says that instigating a change in attitudes towards LGBTQ people in football will have to start from the top, and trickle down through the boardrooms, the locker rooms, to the players on the pitch, and then to the fans.

“I’m still very much involved in professional football and I’m in a stadium every week,” Souness said.

“Every weekend I go to a live game and most weekend you hear some idiot come out with something ridiculous, so it is there and it does exist. It’s something we have to challenge.”

Women’s football has happily accepted LGBTQ players into the top tiers of the sport, but the same cannot be said for men’s football. Right now, there are no openly gay or bisexual male players in the Premier League.

That’s why GAY TIMES teamed hp with Paddy Power to showcase ‘The Game Changer’; a balloon that took two hours to inflate and required enough helium to fill 7,000 balloons.

When carried by volunteers, it reached a height of nine meters. Think it made an impression?

Proud United was created to celebrate the LGBTQ people who are an active part of football – from amateur players, coaches, and referees, to passionate fans of the beautiful game.

They are the Game Changers and a shining example of progression in the sport from a ground level. They should be looked towards from the professional level as role models of change.

Footballers such as Héctor Bellerín and Olivier Giroud have both previously spoken about how they believe the atmosphere in the sport would not accept an LGBTQ player.