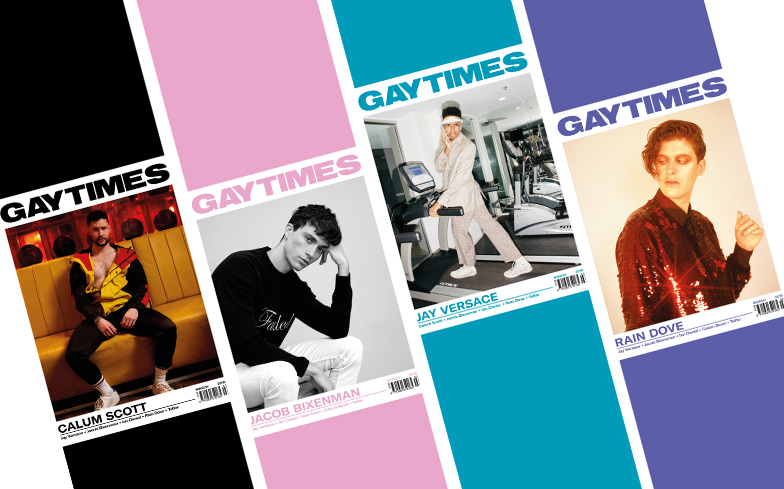 We inspect the varying experiences of queer people from all over the world, and in collaboration with DIVA Magazine bring Rain Dove to the newsstands for the first time. Find out more about our four cover stars below, and pre-order now. Calum Scott soared to stardom in 2015 with his emotive cover of Robyn’s Dancing On My Own which immediately gained him worldwide recognition.

After two years of production, his debut album dives deep into his journey towards true self-acceptance and living openly as a proud gay man.

Speaking exclusively with Gay Times, Calum talks us through his traumatic coming out experience, his struggles with secrecy post-fame, and why songs about queer love and relationships are so important to a new generation of LGBTQ youth.

“When I was honest about myself and my feelings and especially my sexuality, it started flowing out of me like a river. I was writing about my experiences of being gay, of hiding it away, of telling my parents, coming out to the press, the circumstance where I was abandoned – all these different experiences in the hope that if I write these things and I’m honest, even if one person is like, ‘He did it and he was terrified of what people would think but had the strength, maybe I will.’ If it inspires one person, then all of those things I went through was completely worth it.” Jay Versace is the most entertaining face of the new internet wave. Becoming a viral Vine star meant that the entire world bore witness to his success, with his hilarious six-second clips scattered across every social media platform on the face of the Earth.

Having garnered over 2 billion Vine views, and a combined social following of over 4 million people, Jay represents the new breed of internet celebrity. After moving to L.A. to pursue his acting and comedy careers, we spoke with him on his religious upbringing, his public coming out video of 2016, and the freedom of expression he enjoyed on social media.

“There were times when certain people at my church were like, ‘what is he doing? Is he crazy?’ and within a couple of months of making content, I stopped going to church altogether. I couldn’t understand why you’d judge someone for not being like everybody else, and if I carried on at church I felt like people would convince me to be someone that I wasn’t.” Rain Dove, a former firefighter and now an internationally acclaimed model and activist does not subscribe to any construct of gender. A self-titled ‘gender capitalist’, Rain does not use the term non-binary to describe themselves, instead defying all concept of gender entirely and ‘capitalising’ on the various traits commonly associated with either the male or female forms.

In a world first, Rain Dove appears on the covers of both Gay Times and DIVA – two of the most influential and well-respected queer publications in the world, sending a strong message of support to those in our community who do not align with either of the archaic definitions of gender.

“For the first time in my life, this is the closest I could get to the truth. I love who I love and I’m open to any possibility of the future. I don’t really care how people refer to me and I love my body and how it functions, but it isn’t everything I am. I’m a tall human being who has a face that most people would describe as societally manly, but I’ve got the tits of a play bunny that occur naturally – all of which is pretty darn cool!” With a massive social following, past experience walking for Stella McCartney and Dolce & Gabbana, as well as an English Major and a flair for poetry and design, Jacob bixenman isn’t just a pretty face. The California native rose to fame after winning a modelling competition, and has since used his platform to spread a message of queer acceptance and love to his international audience. Speaking with Gay Times, Jacob lays it all bare on the current state of equality, how he manages to share so much of his life while retaining privacy, his relationship with global pop sensation Troye Sivan, and challenging traditional masculinity.

“The idea of what a man is or needs to be is so ingrained into culture and it’s easier to be accepted when you’ve assimilated to that. But there are as many ways to be queer as there are queer people. Male femininity threatens the status quo so I think that sharing and celebrating it really makes people confront their own insecurities. It’s a step in the direction towards actual liberation.”

Elsewhere in the issue: AJA spills the T on All Stars 3; we look back on the queer zines of NYC; Richard Jenkins on playing a closeted gay man in The Shape of Water; Luke Austin on celebrating black masculinity; Ian Daniel on his docuseries Gaycation with best friend Ellen Page; a first hand account of gay life in Israel; Sebastian Lelio on why A Fantastic Woman is one of the most important trans movies of all time; plus music, film, fashion and much more.