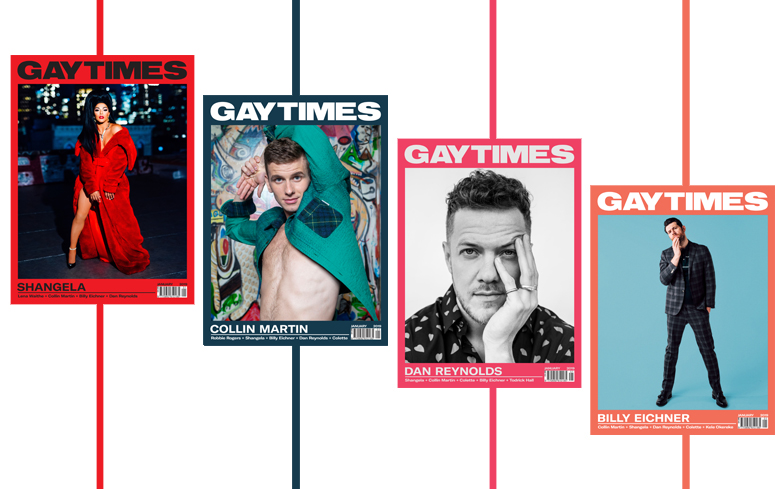 For the January 2019 issue of Gay Times we have four cover conversations highlighting the challenges that we, as queer people, still face on a daily basis.

From homophobia in football, discrimination in Hollywood, the use of the ‘F’ word by comedians for a punchline, and the prejudice LGBTQ people still face in faith-based communities, each of our cover stars offering insight into the issues still prevalent in society, while discussing their hopes for how we can rise up against that.

We start with one of Drag Race’s most notorious queens Miss Shangela Laquifa Wadley. Her role in Golden Globe nominated film A Star is Born took this queen to a whole new level. In conversation with close friend and actor Lena Waithe, Shangela discusses how she came to establish her role in the Hollywood blockbuster and how she hopes for there to be an increase in queer representation in the film industry.

“Someone has to take a chance that people can see past our queer identity and see us as just a character,” she says. Halleloo to that. Next up is an American Horror Story star, comedian and an actor about to play The Lion King’s most meerkat Timon in next year’s live-action remake. Billy Eichner stands proudly as an openly gay man taking a stance against homophobia within the the entertainment industry.

“I’ve always felt a real kinship from a young age with my fellow gay people and my community, the LGBTQ community at large,” he tells us. “I always feel the need to speak up and demand respect when we’re not getting the respect that I think we deserve.”

Elsewhere, Dan Reynolds went from being raised as a devout Mormon, to a globally renowned rock star, and has now found himself as one of the LGBTQ community’s most outspoken advocates.

In his first Gay Times cover feature, he recalls how his experiences with the people that were closest to him sparked a fire within him that urged him to join the fight against homophobia within the Mormon community. And finally, professional footballer Collin Martin grabbed headlines earlier this year when he made the courageous decision to speak publicly about his sexuality. The Minnesota United team member is in conversation with his fellow openly gay footballer Robbie Rogers here, discussing how he feels after finally taking a leap of faith and his thoughts on how sports can become a more inclusive environment for queer people.

“One of the cool things about soccer is that it’s such a multi-cultural sport so you’re going to have people that have different religions, different backgrounds, completely different educational experiences growing up, and so you have to take that with a grain of salt,” he explains.

“Within each locker room that I’ve been in, there was certain guys that might have been further behind in terms of acceptance than others, but for the most part, I think even when there were some misunderstandings, there was always respect.”

All four covers of the January 2019 issue of Gay Times are on sale now.