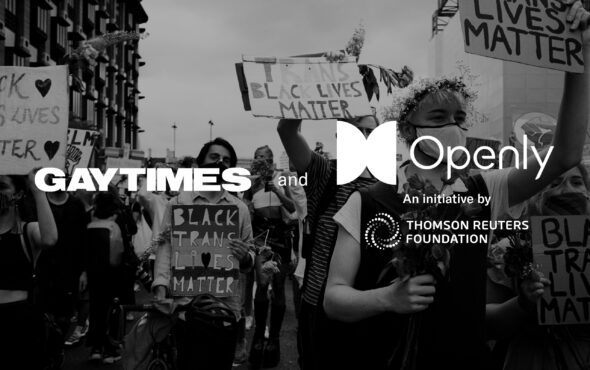 GAY TIMES Group and Openly, the Thomson Reuters Foundation’s LGBTQ+ digital news platform, have announced a new partnership to benefit each of their respective audiences, delivering more in-depth reporting to a wider audience and to the global LGBTQ+ community.

GAY TIMES will deliver Openly journalism to its global audience across a range of channels, including online and social media. The two organisations will work strategically together to be a true global leader in quality content created by LGBTQ+ people, for LGBTQ+ people with Openly benefiting from the scale and reach of the GAY TIMES audience and GAY TIMES benefiting from Openly’s original coverage of global, accurate and impartial LGBTQ+ news.

More than ever, the world needs reliable, trustworthy and high-quality coverage of LGBTQ+ issues which is developed with a high degree of nuanced understanding and perspective. The Thomson Reuters Foundation has an established reputation for world-class global news reporting, adhering to the Thomson Reuters principles of integrity, independence and freedom from bias. Openly was launched to deliver impartial LGBTQ+ news from around the world, covering stories that were not being told. GAY TIMES has been on the frontline of the LGBTQ+ movement since 1984, reporting on the big issues, shining a spotlight on emerging queer talent, and amplifying voices from across their vibrant and diverse community.

Our first of its kind partnership between GAY TIMES and Thomson Reuters Foundation via their LGBTQ+ focussed digital platform, Openly, will enhance the depth and scale of coverage we are delivering to our global LGBTQ+ audiences.

This unique collaboration will further GAY TIMES Group’s mission to inform, educate and inspire LGBTQ+ people around the globe through the highest quality content.

Through delivering more news and in-depth reporting to our unparalleled audience, this partnership will help us to deliver content created by LGBTQ+ people, for LGBTQ+ people.

We are thrilled to be working with the team at Openly / Thomson Reuters Foundation and are excited for our unique partnership to grow with our audiences.

Openly stands for unbiased neutral reporting on LGBTQ+ issues, including on policy and legislative shifts around the world. It has a strong track record on breaking global news stories, such as Brunei’s attempt to introduce the death penalty for gay sex. By shining a light on underreported stories to empower under-represented communities, we can counter misinformation and misrepresentation with greatly needed factual and fair coverage.

Our exciting collaboration with GAY TIMES Group will enable Openly stories to reach a much wider audience and accelerate our mission towards advancing human rights and building more inclusive and prosperous societies.