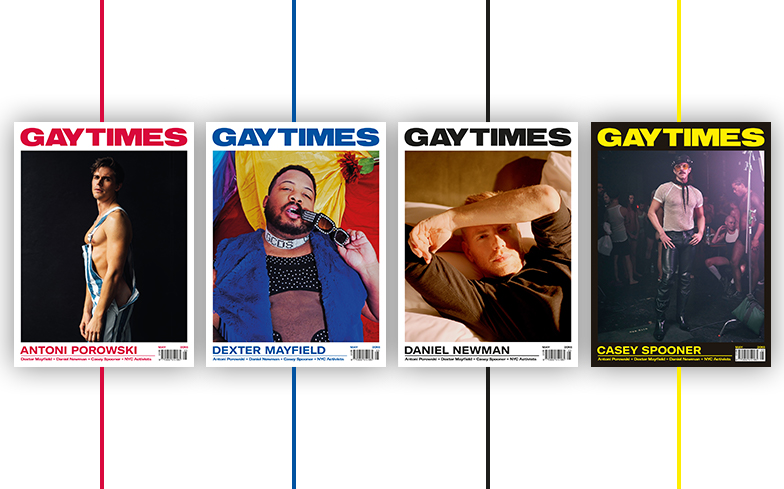 In our May 2018 issue, we bring together four men from various industries who are each challenging societal norms and altering perceptions both in and out of our community.

Just by living their unapologetic truth, each one contributes to the true equality that becomes ever more tangible to our community.

Antoni Porowski was catapulted into international fame when he was revealed as one of the Fab Five in the Netflix reboot of Queer Eye earlier this year. As the resident ‘food and wine guy’ of the group, Antoni has not only been helping the subjects of the show get their lives back in order, but has been part of the catalyst to a much needed conversation in Tr*mp’s America of living beyond tolerance and into acceptance. The show has also served to further Antoni on his own personal journey, and the close friendships he’s formed with the other members of the glittery new Fab Five have helped him embrace the extent of his own sexuality. We spoke with Antoni on the incredibly successful launch of the show, building bridges with the heterosexual community, and the importance of representing platonic relationships between gay men on screen.

“When I first started telling people about the show, I would embarrassingly catch myself whispering ‘Queer’ as though… I don’t know if I was embarrassed or I had some kind of shame, but it still felt taboo from childhood. It’s kind of nice because now I say it really confidently. The more you immerse yourself in something, the less precious it gets.” “I’ve always considered myself a little more fluid along the spectrum. So even being called bisexual… I remember in my early twenties I was like, ‘But bisexual means I can only like girls and guys, what if I like something else?’. Maybe it’s just my rebellious nature. I’m me, I’m Antoni, and I’m all these things. Some people want to define themselves, and they should as it’s part of their identity. For me personally, I’ve never really had a label for myself. Today I’m gay, I’m in a gay relationship, and that’s where I am. That’s good enough for me.”

Dexter Mayfield all but broke the damn internet when he stepped out on to the runway of a Marco Marco fashion show. Since then he’s been living his best life unapologetically, appearing in music videos left right and center. With an eclectic portfolio of modelling, and a proverbial rolodex full of celebrity friends, we met Dexter on the importance of body positive representation, the underlying racial stigma in the gay community, and his hope for a more inclusive future generation of queer people.

“Being an overweight, obese black man in the gay community is not easy. There’s enough prejudice and hate out there in general, especially for us. For people to not understand that sexual racism is a form of prejudice and a form of institutionalised racism. Excluding so many people because of a ‘preference’ is frustrating, and it’s something that we need to stop. It’s hypocritical to the overall message our community hopes to spread, of love and acceptance. It’s such an ignorant problem to have.” The Walking Dead is a TV phenomenon that responded to the resurgence in Zombie popularity to effectively ‘infect’ the world and solidify itself as the go to programme of the gorey genre. One of the many breakout stars of the franchise, Daniel Newman, shared his coming out video on YouTube and received an overwhelmingly positive response from fans and and peers alike. Now working alongside GLAAD, Daniel continues to use his platform to educate and inform not only his queer following, but also the more mainstream audience of The Walking Dead. We caught up with Daniel on the importance of living your truth, how long he felt like he needed to repress his sexuality, and stepping up as a role model.

“Your sexuality is a huge part of your identity as a human being, and therefore it’s so important to embrace your community, love yourself the way you are, and be open and proud about your identity. It’s not only the healthy way to live for yourself, but – just as important – it’s vital for the hundreds of millions of us in our society to have visibility, equality, respect, power, and to be role models for our community and the next generation. It’s easy to oppress the invisible. It’s easy to steal the rights from people who are silent or hate themselves. Power comes in loving ourselves and being visible and people of integrity, support and love for one another.” Heteronormativity is a frightening concept. The idea that queer people should suppress certain elements of our identify in order to become more palatable for the straight population certainly doesn’t sit well with us. Fighting on the front lines against this rising wave of heterophilia is Casey Spooner, the musician whose art doesn’t just imply queerness but rather screams it from the rooftop. Casey’s work is incredibly important as we as a community grow comfortable with the portrayals of queer people in media where often the only thing ‘homo’ about them is that they’ve been homogenised. We met Casey in a club and spoke with him on his ‘aggressive homosexuality’ brand, his new music, and friendship with RuPaul’s Drag Race winner Violet Chachki.

“We get lesbianism showcased in entertainment all the time. It’s a non-issue to go and see a Charlize Theron in Atomic Blonde where she has a lesbian sex scene that no one really talks about it, but once you have a gay scene in such a Hollywood film – it instantly makes it a gay film. There’s this weird double standard because the entertainment industry is dominated by heterosexual men that making queer music is actually as much for women as it is for gay men.” Elsewhere in the issue: Desmond Is Amazing a.k.a the ten year old Drag Queen of our dreams; Maxim Magnus on being a visible role-model to the trans community; the activists of New York City; Resort 12 and the nature of LGBTQ addiction; the stars of 120 Beats Per Minute; the eclectic world of Casa Susanna; newcomer SAKIMA on embracing their queerness; Fox Fisher on the vastness of the trans community; coming of age as a queer jew; plus fashion, music, film, theatre, essays, travel and much much more.

Pre-order yours now at gaytimes.co.uk/buy