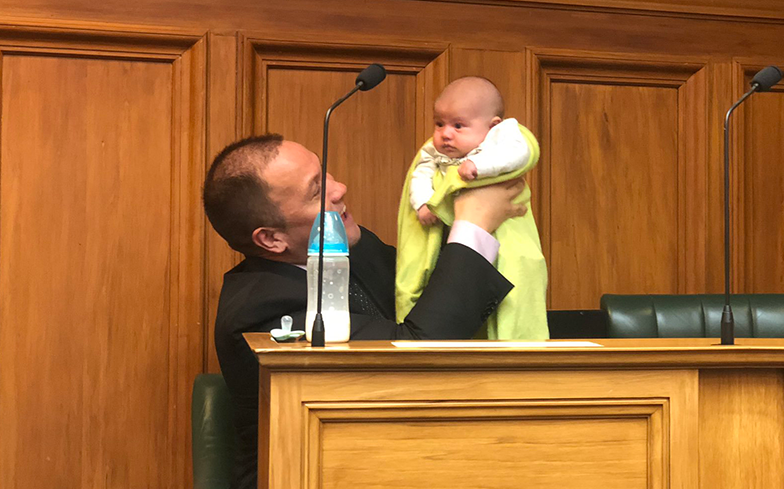 “The speaker’s chair is only used by presiding officers, but today a VIP took the chair with me.”

Tāmati Coffey made headlines after taking his six-week-old son Tūtānekai to Parliament with him (21 August).

The openly gay politician – who represents the Māori electorate of Waiariki – attended a debate with his baby for the first time after returning from paternity leave. The baby was born via a surrogate and is the biological son of Coffey’s partner, Tim Smith.

Trevor Mallard, the speaker of New Zealand’s parliament – was seen feeding the newborn while the proceedings occurred.

“Normally the speaker’s chair is only used by presiding officers, but today a VIP took the chair with me,” he tweeted. “Congratulations @tamaticoffey and Tim on the newest member of your family.”

Gareth Hughes, member of the Green Party, later tweeted: “Lovely to have a baby in the House, and what a beautiful one.”

Coffey said he’s received “nothing but support from fellow MPs across the House” during an appearance on Good Morning Britain and had nothing but praise for Mallard, who “actually voted for homosexual law reform here in New Zealand.”

He continued: “It was the change in that that made it normal and okay to be gay, that made people like me think maybe one day I can have my own son, be in a relationship, and not worry too much.”

Mallard, who appeared alongside Coffey via satellite, said: “It’s really good to see the societal change that’s occurred over the last 30 years. We are a much better society. I can’t imagine anyone criticising caring for kids.

“In our Parliament, we’ve been trying for a few years now to be family friendly. Some of us have a strong philosophical view that we want everyone to think about becoming an MP, including people with children.”

Mallard said having a baby in the chamber had a “calming” influence during the debate.