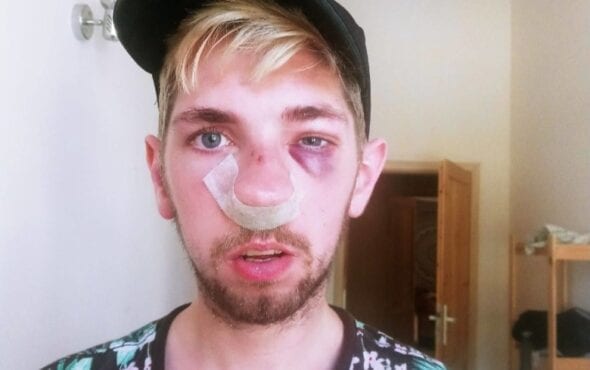 Miłosz Miklaszewski was set upon in broad daylight.

Miłosz Miklaszewski, a gay Polish man, was horrifically beaten by a couple of drunken, homophobic thugs in broad daylight at the Rusalka Wilf Beach, in Warsaw. Despite the presence of other people around, no one came to assist him as he was beaten.

Miłosz was taken to hospital following the attack, and was kept there for two nights. He is now appealing for people to come forward ahead of an investigation by the police.

Writing about the attack on Facebook, he said: “Sadly in broad daylight I was beaten and robbed. I wanted to make the most of two days off from work, especially this beautiful, sunny weather… I liked the place where I spent my time especially because it wasn’t crowded and [was] partly neighbouring the forest.”

He explained that after a couple of hours, two men were walking the beach screaming things at passers-by. After seeing them approach a person who was riding their bike, Miłosz “grabbed [my] things and wanted to escape because I avoid situations like this most often but I didn’t make it. I don’t know if they saw how I wanted to run or what but they suddenly found themselves next to me.”

Explaining what happened, he said: “I panicked and didn’t know what to do. Suddenly I felt impotence filling me. One of them pulled out a telescope stick. I was attacked with her. I was beaten especially on my head and face by one of them. The second one was just laughing and trying to stop that one by saying ‘come on’ but he did nothing to distract him from me.”

He wrote that the man who beat him shouted slurs at him, including calling him a “bitch.” Miłosz added: “I don’t remember much. I think it’s the fault of the punches that I fell several times. I was so shocked that it’s hard for me to remember something right now… At the very end, if only that wasn’t enough they started searching my backpack and pants. They stole my glasses and my phone…”

He added that he was at a loss as to why the men attacked him, suspecting they targeted him because of his “dyed hair and earring.”

Miłosz urged people to report what happened, saying “who knows if they won’t hit someone from your family next time? Please conquer this post, like, share, send it to others! If anyone has more information please contact me or police unit at 16 Kochanowski Street in Poznań by phone 22 61 841 12.” Poland is experiencing a massive wave of homophobia at the moment, with many queer people in the country fleeing for their safety, enabled by its Prime Minister, Andrzej Duda, who made opposition to LGBTQ+ rights a key plank of his re-election campaign.

Duda signed a declaration called The Family Card that would ban LGBTQ+ lessons in schools to protect children from so-called “LGBT ideology.” And several areas in Poland have declated themselves to be LGBTQ+ free zones, something that has attracted widespread condemnation outside of the country, with the EU removing funding for areas declaring themselves as such.

To show solidarity with the LGBTQ+ community, the 10 MPs – from Poland’s “Left” grouping – all wore rainbow masks and outfits in the shades of the rainbow as Duda was sworn in in the lower house of parliament, the Sejm.

Photos can be seen of them inside and outside parliament with rainbow and white and red Polish flags.