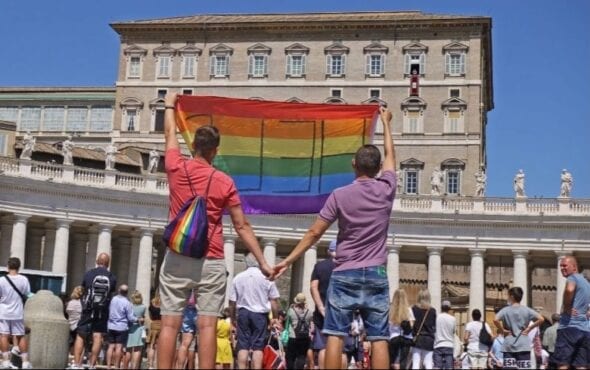 Dawid Mycek and Jakub Kwiecinski travelled to the Vatican to ask the Pope for help against Poland’s homophobia.

A gay Polish couple, Dawid Mycek and Jakub Kwiecinski, have travelled to the Vatican and unfurled a Pride flag calling for help. They hope that the Pope may assist them in condemning the wave of homophobia that is currently enveloping Poland.

The couple unfurled the Pride flag during the Pope’s Angelus Prayer, which is held at St. Peter’s Basilica, and returned to St. Peter’s Square during the week in an attempt to have their message heard.

The couple have previously protested against Poland’s homophobia by using rainbow face masks. They received an overwhelmingly positive reaction for their activism, but have also been subjected to homophobic abuse for promoting a “homosexual plague.”

Writing about their decision to fly the flag, the couple said on Instagram: “Our big rainbow flag flew proudly for several dozen minutes, and on it a large inscription HELP. Because if Pope Francis himself wears a rainbow cross and says: ‘It doesn’t matter that you are gay! God loves you as you are’, it’s time for the Polish Church to teach the same thing, which still fuels hatred against LGBT people.

“We were amazed how many Catholics from different countries approached us with words of support. Nobody felt offended by the rainbow, the police did not chase us out, and when we were alone in the square an hour longer, one of the priests came to us, offered water and listened to what we had to say.

They added: “We also used the LGBT discussion panel we’re attending to report on Poland! Because the rainbow does not offend!”

Pope Francis is considerably more progressive than other popes in the past when it comes to LGBTQ+ rights including telling a gay victim of clerical sexual abuse that God had made him gay and that he loved him anyway, and criticising anti-gay politicians, saying their speeches reminded him of ones given by Hitler.

On the negative side, and buckle up there’s a lot, he’s said that gay children should be taken to psychiatrists, refused to accept that LGBTQ families were real, said that teaching children about gender identity was “indoctrination”, supported anti-same-sex marriage protesters in Mexico and refused to believe that gay men could join the clergy, calling homosexuality “fashionable”. Poland is experiencing a massive wave of homophobia at the moment, enabled by its President, Andrzej Duda, who made opposition to LGBTQ+ rights a key plank of his re-election campaign. This has led to many queer people fleeing the country for their safety. However, there is some fighting back, as just last week, a list of writers, actors and directors penned an open letter protesting Poland’s treatment of the LGBTQ+ community.

And at the swearing in ceremony of Polish president, Andrzej Duda, the 10 MPs – from Poland’s “Left” grouping – all wore rainbow masks and outfits in the shades of the rainbow.

Related: New Polish minister has linked “LGBT ideology” to a “civilisation of death”