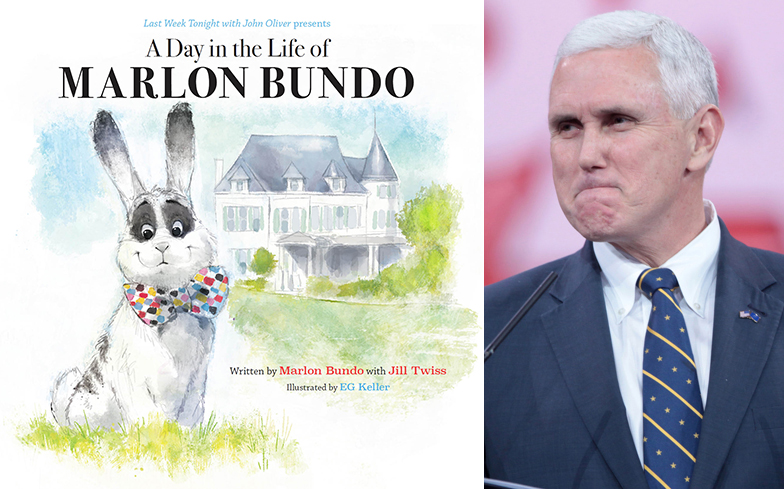 A parody of a book about Mike Pence’s family pet has become a bestseller.

The Vice President and his family have just released a children’s book based on their real-life rabbit Marlon Bundo, which was written by Pence’s daughter and illustrated by his wife, second lady Karen Pence.

But their foray into the world of publishing may have been thwarted by Last Week Tonight host John Oliver, who with the help of writer Jill Twiss has released his own Bundo book, and its selling even better than the original.

A Day In The Life Of Marlon Bundo reimagines the Vice President’s pet as a gay bunny who fall in love with another gay bunny called Wesley, which we’re sure is infuriating for Pence given his toxic anti-LGBTQ views.

“I live with Mom, Grandma, and Grampa in an old, stuffy house on the grounds of the US Naval Observatory. That’s because my Grampa is the Vice President. His name is Mike Pence,” reads an exert from the book.

“But this story isn’t going to be about him, because he isn’t very fun. This story is about me, because I’m very, very fun.”

While Pence’s book is currently at number four on Amazon’s bestseller list, Oliver’s parody version is sitting at number one, and has actually sold out due to unexpected demand – but fear not, as there will be more copies printed soon. And if trolling the Vice President wasn’t enough reason to get involved, proceeds from the parody book will go to LGBTQ-friendly charities like The Trevor Project and AIDS United.

Pence, the former Governor of Indiana, has repeatedly shown an anti-LGBTQ stance during his career – he supports discrimination based on religious beliefs, said same-sex marriage would lead to “societal collapse”, and voted against passing a non-discrimination act.

Back in 2000, Pence proposed a shift in government funds from the Ryan White Act (which helps those living with HIV/AIDS) to “institutions which provide assistance to those seeking to change their sexual behaviour”.

Despite this bigoted history, it seems the Pence family have taken the parody in their stride, as the official Marlon Bundo Instagram account shared a photo of the bunny wearing a bow tie, similar to the one in Oliver’s book.

“Not gonna lie, I do look pretty fly in a bow tie,” he wrote. “The only thing better than one bunny book for charity is… TWO bunny books for charity.”

During an appearance on The Ellen Show, Oliver explained his decision to release the parody book.

“[Pence] clearly, to put it in the nicest possible terms, is not a friend to the LGBTQ community,” he said.

“So we have released our own book about his bunny, where his bunny falls in love with another male bunny and gets married, because that’s the world we want to live in.”