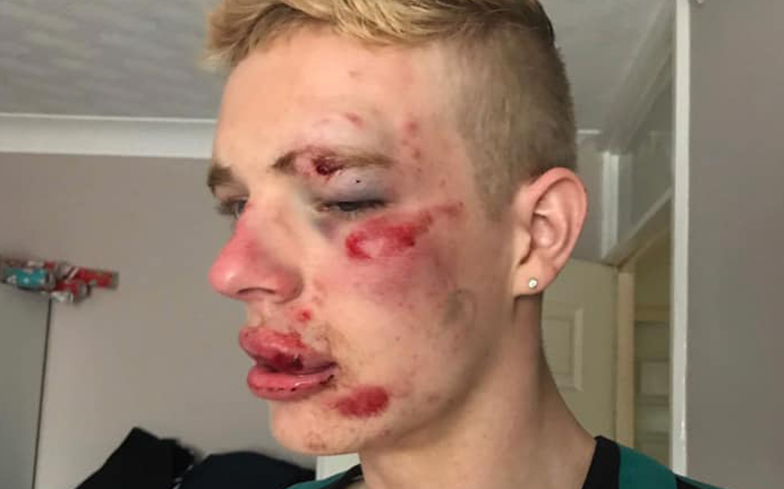 “I never thought in my life that I would get beaten up for being gay.”

Ryan Williams – who works as a receptionist in Lancashire – was headed to a McDonald’s after a night of partying when he was approached by the homophobic assailants, who left him with facial damage so severe he was taken to hospital.

“We were called following reports of an assault in Friargate, Preston,” said local police. “A man in his 20s had been punched by another man close to McDonalds. The offender then made off from the scene with two men and a woman.

“The victim was knocked unconscious suffering facial injuries. He later was taken to Royal Preston Hospital for treatment. The assault is being investigated as a hate crime and enquiries are on-going.”

Ryan spoke with The Mirror and said the attackers launched several anti-gay comments, so he “went over and told them it’s not okay to say things like that”, which led to him being assaulted in the back of the head.

Shortly after the attack, Ryan uploaded a shocking photo of his injuries alongside the caption: “I never thought in my life that I would get beaten up for being GAY! Wtf has this world actually come too, you’re all vile and disgusting!

“I want people to understand that being gay ISNT a choice and I can’t help it, I’m sorry that you can’t deal with it but hey ho no need to knock someone out because of it! I seriously can not believe that a homophonic attack happens!

“Stand strong and love yourself, this isn’t gonna stop me from being fabulous! BEING GAY IS OK!”

The post was met with an incredible amount of support, receiving over 25,000 likes, 41,000 comments and 67,000 shares on Facebook. Preston’s local MP, Mark Hendrick, tweeted it’s “horrendous” that attacks like this still occur in 2019.