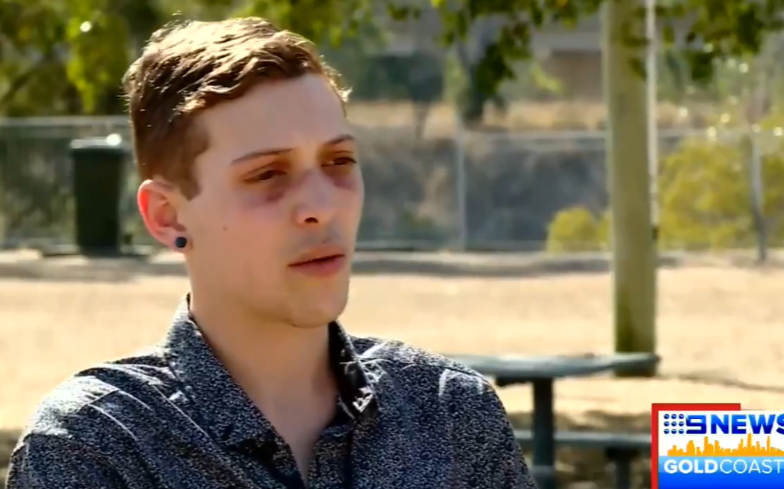 Joshua, 21, and his younger brother, 16, were attacked in Queensland, Australia.

A young man and his brother were subjected to a homophobic attack by a “bloodthirsty” gang in the Westfield Coomera shopping centre. The pair had been visiting family in Queensland when the attack happened.

The two men were initially subjected to homophobic abuse on a bus, before the gang targeted them in a shopping centre. The attack lasted a few minutes before security was able to intervene.

Both Joshua and his younger brother were taken to hospital immediately after the attack. Joshua suffered broken ribs, two blacks eyes and internal bleeding, while his brother received fractured ribs and a split lip.

Daily Mail Australia reports that the two men were called “fucking faggots” and “gay c***s” by the group.

“We were both down on the ground, we weren’t able to defend ourselves.”

He added that the gang believed that the law wouldn’t touch them because they were all minors, but a 15-year-old and 18-year-old have been charged in connection with the attack.

Speaking to the Gold Coast Bulletin, Joshua said it looked like the group were “hunting” for someone when they were targeted. “It’s just horrible. It’s cruel,” he said.

“It was completely unwarranted, it’s just brutal violence. It’s a hate crime. I feel like I can’t go back to Queensland [anymore]. It’s shaken me.”

He added: “I feel like me being gay, that I have put [my brother] in danger. It wasn’t once but twice. I have a lot of guilt.”