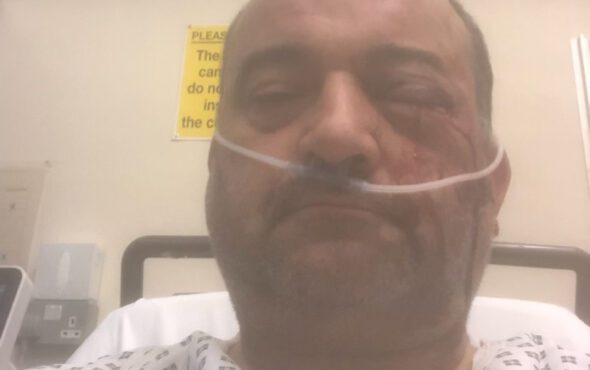 A gay man could lose his sight after being the victim of yet another brutal “hate crime” in Birmingham’s Gay Village.

Matt Brooks was beaten and left unconscious at around 2am on 30 September outside the fast food restaurant Urban Kitchen.

The 52-year-old was punched in the face which resulted in a fractured eye socket, something that required emergency surgery to relieve pressure on his eyeball and save his vision.

Speaking to Birmingham Live, Brooks says he had gone for a few drinks at Missing Bar after finishing work at midnight before heading home in the early hours of the morning.

“Closing time was about 2am and I went over the road to get some chips,” Brooks explains. “I sat against the window of Urban Kitchen when a guy came out of nowhere and just hit me.

“It was completely unprovoked and went straight for me. I have no real memory of it.

“The first thing I remember is being on the floor and there was an off duty fireman and another man, both passers-by, who were helping me. I can’t thank them enough.”

Brooks believes it is “more than likely” that he was the victim of a hate crime, especially given the recent wave of homophobic attacks in Birmingham.

He tells Birmingham Live: “It’s in the area and it’s kicking out time. I could have stood out as an easy target. It could have been a hate crime. It’s more than likely.

“He just hit me and did a runner. It wasn’t a fight. It was a proper punch.

“At the moment doctors are trying to keep the pressure down on my eye with tablets and eye drops. He’s fractured the lower part of the socket on the left hand side. If that keeps going that could take the eye sight out.”

My good friend Matt got beaten unconscious in the Gay Village and ended up having surgery in A&E on Wednesday night and he still hasn’t been interviewed by a Police officer @WMPolice @SouthsideDist @BrumLeader @ShabanaMahmood pic.twitter.com/9z6zcepvWc

“They’ve already had to go emergency surgery to stop me going blind because of the pressure in the eyeball. If it had lasted any longer I would have gone blind already, but there is still a chance that will happen,” Brooks continues.

The incident was reported to police by Brooks’ friends after he was taken to hospital, but the victim claims he has not yet heard from the police to chase up on leads.

“I tried to phone the police and couldn’t get through. I tried the mychat and robot thing, but I was just waiting,” he shares.

“I finally got through on Friday morning, but they said an officer had not been assigned to it yet and might take two days.

“I feel let down and disappointed as police have a lot of information here.

“This guy could be out there again today or tomorrow. He needs to be stopped. My boss believes he employed him at a different workplace and said he had beaten up a guy with a belt.”

On 3 October, a spokesperson for West Midlands Police said: “We have now contacted the victim and our investigation is progressing.

“Hostility and prejudice towards people because of their race, sexual orientation, disability, faith, age or gender is a hate crime. And, like all hate crimes, we will investigate and pursue offenders with vigour.”