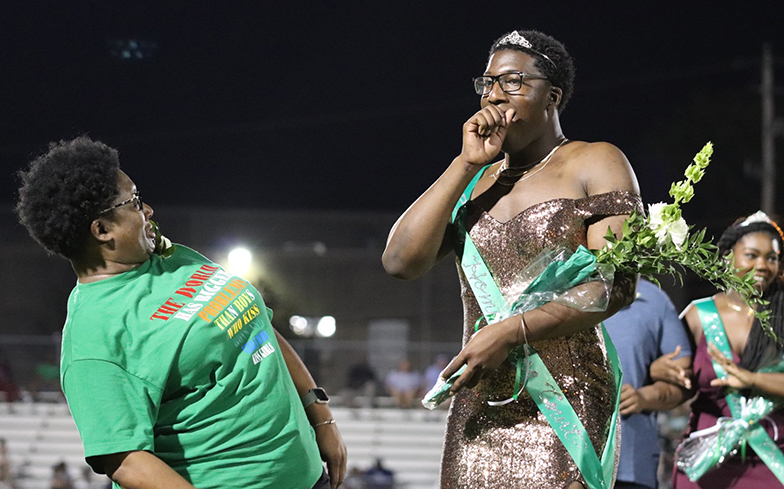 A high school senior in the US has gone viral after being crowned homecoming royalty.

Students at White Station High School in Memphis, Tennessee voted for 17-year-old Brandon Allen – who identifies as gay – to receive a tiara, a green sash and a bouquet of flowers.

“Thank you to everyone who has contributed to me becoming queen,” he wrote on Instagram. “You guys truly looked stunningly beautiful and I am so honoured to have been able to walk with you guys!”

White Station High School shared a photo of Brandon looking shocked after he found out the news, and it’s since gone on to receive thousands of likes and comments of praise on both Facebook and Twitter.

“I’ve never been prouder to go to White Station. Brandon is one of the kindest people I know and he deserves this SO much,” wrote one alum of the school on Facebook, while another added: “You give us hope for the future!”

There were some negative comments about Brandon’s crowning, but White Station principal, Carrye Holland, defended the school’s decision.

“Here’s the thing: it’s Brandon’s right to run for homecoming court under Title IX. It’s the students’ choice of who they want to support as homecoming royalty,” she wrote in a comment on Facebook.

“I’m exceedingly proud to be the principal of our amazing school. You don’t have to agree but disrespectful comments will be deleted.

“WSHS loves and supports everyone regardless of who they are or what they believe. Thank you for the love and light from so many of you.”

Brandon even got a shout out from non-binary Queer Eye star Jonathan Van Ness, who tweeted that the photo of him in his tiara and sash was “beautiful”.