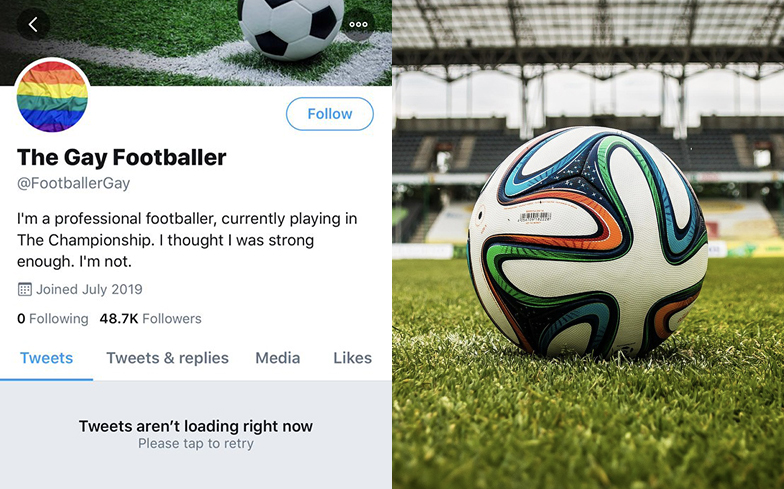 Earlier this month, the anonymous footballer opened a Twitter account under the name ‘The Gay Footballer’, claiming he was a Championship player under the age of 23 and would be “revealing [his] identity soon”.

But the night before before he was expected to hold a press conference to announce his identity on Wednesday (24 July), he informed his more than 50,000 followers that the plan had changed, and that he would no longer be coming out.

“I thought I was stronger. I was wrong,” he wrote, before later adding a more detailed explanation where he denied that the whole thing was a hoax.

“Call me all the names under the sun, belittle me and ridicule me, a lot will, and I can’t change that, but I’m not strong enough to do this,” he continued.

“Just remember that I’ve got feelings, without coming out I can’t convince anybody otherwise, but this isn’t a hoax. I wouldn’t do that.” The Twitter account has now been deleted, dashing hopes that the UK men’s football Championship would see representation for LGBTQ players.

Justin Fashanu remains the only British male player to have publicly come out will playing in the Football League in 1990. He later took his own life in 1998 at the age of 37.

Speaking to Sky News, Justin’s niece Amal Fashanu said she was “disappointed” in the outcome.

“I’m pretty disheartened. It’s actually upsetting. Have we made it that bad – the environment in football – that no one can actually come out?” she said.

“That’s what really concerns me the most – the fact he could be gay and, actually, has been going through really bad times and now he really feels like he doesn’t want to come out.”

Related: Out footballer Collin Martin says there “has to be more” gay pro footballers