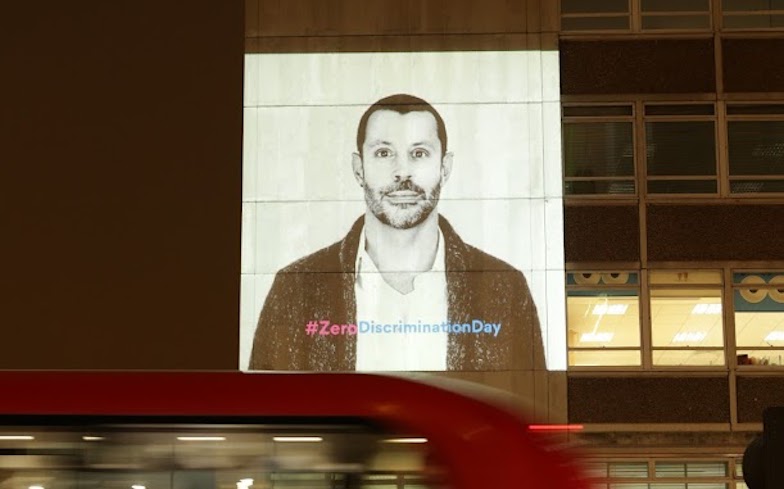 “Chappy wants to mobilise positivity and respect, to create a space that is respectful to everyone.”

The annual day – celebrated by the United Nations – aims to highlight the diversity of Chappy’s community whilst educating audiences on how prevalent discrimination is in today’s society. It also aims to promote equality in law, and in practice throughout the member countries of the UN. ​ Chappy’s research revealed that 40% of gay men have experienced discrimination in the past year, and over half of the 500 people they surveyed admitted to experiencing racism, body shaming, or general abuse on dating apps.

The campaign featured a series of 15 portraits and statistics, and was projected yesterday (1 March) by Projection Artworks on various buildings around Soho.

Jack Rogers, co-founder of Chappy, said: “Dating can be intimidating. It is our responsibility to create an environment that is safe and fun, not rude and abusive.

“Along with the Chappy Pledge we launched earlier in the year and our Zero Discrimination Day campaign, Chappy wants to mobilise positivity and respect, to create a space that is respectful to everyone. We’re very proud to be a part of such an important initiative.” Chappy was launched in 2017 and aims to provide gay men with a high-quality platform for online dating. Their unique ‘Chappy’ scale allows users to choose whether they’re looking for ‘Mr. Right’, ‘Mr. Who Knows’ or ‘Mr. Right Now’.

The app is the third most downloaded gay dating app in the US and UK, and has over 300,000 users.

For more information on Chappy, visit their official website here.