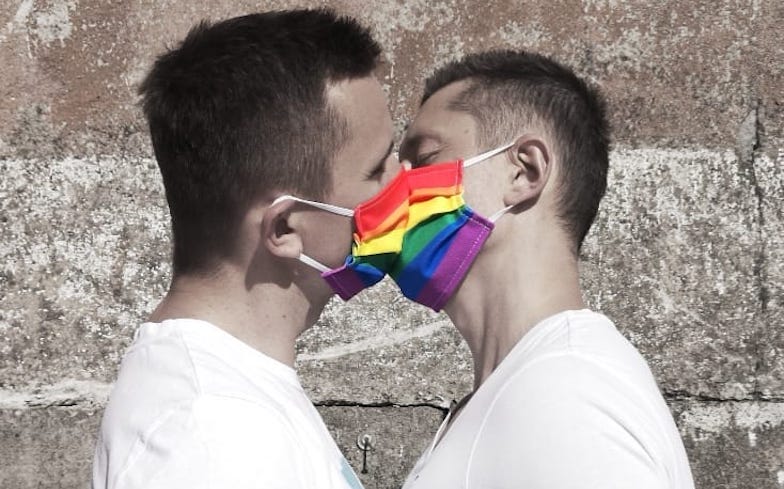 This month alone, Dawid Mycek and Jakub Kwiecinski have distributed over 300 masks on the streets of Gdansk to protect citizens from the coronavirus pandemic and to raise awareness for LGBTQ+ rights in the country.

Kwiecinski said he and his husband, who married in Portugal, have received an overwhelmingly positive reaction for their activism, but have also been subjected to homophobic abuse for promoting a “homosexual plague.”

“We thought that if we are dealing right now with a real plague (the new coronavirus) we could help protect people from this plague and do something good,” said 37-year-old Kwiecinski.

“The situation of LGBT people in Poland is getting worse I would say day by day, we have the right-wing in power… the Law and Justice party and they are against LGBT. They also encourage people to attack us, to insult us.”

In an Instagram post, Kwiecinski also acknowledged Poland’s status as “the most homophobic country of the European Union” and hit out at homophobes with a photo of him and his husband kissing on the beach.

“We still believe that love conquers all and we dedicate this juicy kiss to all homophobes in our country!” he wrote.

Last year, a third of Poland declared themselves an “LGBT-free zone” free from “LGBT ideology.”

The European Parliament passed a motion condemning the country. The motion noted how most of the 80 regions in the barbaric aforementioned zones “discriminate in particular against single-parent and LGBTI families”.

The motion was opposed from Poland’s ruling Law and Justice party.

Witold Waszczykowski, a former Foreign Minister, said that the LGBTQ+ “ideology that someone is creating out of this” is “demanding special treatment and causing upheaval.”

Why are US states banning transgender women from sport?