Garrett Clayton opens up about his experiences of homophobia in Hollywood 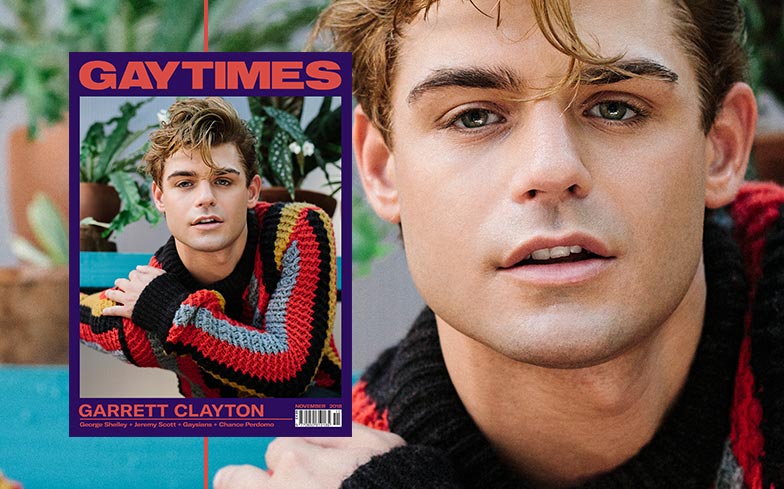 Garrett Clayton made headlines when he came out as gay back in August.

It followed years of unfair speculation from both the public and the media – many of whom pressured him to come out when he wasn’t ready – and closed out a chapter of the actor’s life that saw him hide his true self in the public eye.

Now, in his first interview since coming out as gay, the former Disney star tells Gay Times he “finally feels comfortable” with his sexuality – but there was a time that the homophobia he experienced in Hollywood pushed him further into the closet.

“One of the first things somebody who was instrumental in starting my career did, they sat me down and they said, ‘Are you gay?’ And I could feel the pressure of the question, so I was like, ‘Yeah, I’m gay, or bi, or whatever’, because suddenly I could feel that there was something wrong with that in this person’s eyes,” he says.

“They looked at me and said, ‘No one wants to fuck the gay guy, they want to go shopping with him, so we’re going to have to figure this out.’ It turned into this situation where I’d get calls and they’d say, ‘You still need to butch it up’. I literally had to change everything about myself at that point, otherwise I was never gonna make it.

“And that was so conflicting, because here’s somebody offering you your dream, but they’re telling you that you’re not good enough the way you are. You’re talented, but who you are isn’t good enough.” Unfortunately, this insidious homophobia was something that continued long into Garrett’s career.

“They had me changing the way I walked, the way I spoke, the way I dressed, the way I answered questions,” he continues. “It got as petty as them saying, ‘People need to see that you’re into sports because they’ll think that’s more masculine, so why don’t you go buy a sports hat, take some pictures in it, and make sure people see you in it’.

“There’d be calls after I went into casting offices like, ‘Hey, this is how gay casting thought you came across today, so here’s what you need to do to fix it’. I even had cast members screaming drunkenly in the middle of a room, ‘Who here thinks Garrett is gay?’ and then yelling at me for not having come out yet.”

It felt “like being back in high school” for the aspiring actor, and the self-suffocation prescribed by those around him inevitably took its toll, leading to a period of reclusive behaviour and depression and, ultimately, therapy.

“I convinced myself that I was the problem, and I got into a really dark place for a couple of years. Then I went to therapy for about a year and a half to really sort through all the things I went through growing up and the situations I found myself in while in Hollywood. I got to work through all those conflicting things.”

Elsewhere in our November cover interview, Garrett opens up about the bullying he faced at school, his family’s reaction to him coming out as gay, and his long-term relationship with screenwriter Blake Knight.