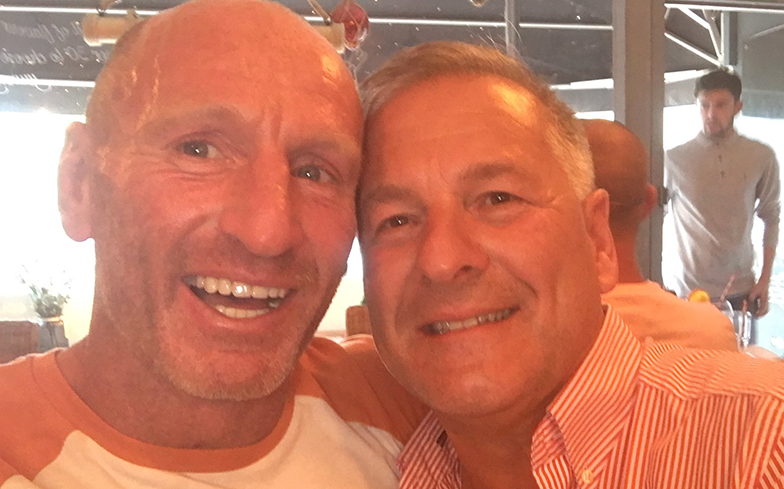 Gareth Thomas has thanked his husband Stephen for being his “beacon of light”.

The 45-year-old former Welsh rugby captain bravely told the world that he is living with HIV last week, after an unnamed tabloid newspaper learned of his diagnosis and sent journalists to his parents’ home.

In a video shared on social media, Gareth added that “evils” were threatening to go public with the information, forcing him to tell his fans about the diagnosis himself.

Now, speaking to OK! magazine, Gareth said there was “absolutely no way” he would have been able to make it through the two week ordeal without his teacher husband Stephen.

“I’d try to hide how was I feeling because I didn’t want it to impact on my family and friends,” he said.

“But it becomes impossible when you start having panic attacks and you want to cry constantly. I have learned a lot about vulnerability and inner strength from Stephen.

“When I was feeling really low, I always had Stephen to go home to, to talk to, to make me laugh and be there if I wanted to cry and not judge me. He was there at a time when I really needed him.

Recalling the moment he told his husband about his diagnosis, Gareth added: “No conversation is difficult with Stephen. He doesn’t judge people. When I told Stephen, he didn’t know anything about HIV.

“But he trusted me and the conversation was very simple to have. I just want to make sure that he knew and understood everything about it fully.”

The sportsman also recently revealed that a tabloid journalist told his parents about his HIV diagnosis before he could.

In an interview with BBC Breakfast TV, an emotional Gareth said the journalist “took that moment” away from him, but added that he has the “best parents on the planet” because they still support and believe in him.

“Can you imagine someone coming to your door and saying something so personal and so intrusive to you about the thing and person that you would love and protect through anything. Can you imagine how that would feel?”