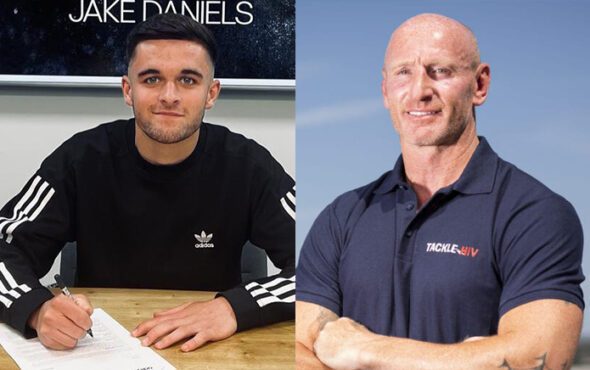 Former Wales rugby team captain Gareth Thomas said he hopes British footballer Jake Daniels’ decision to come out as gay will help tackle homophobia in sport and give other LGBTQ+ athletes the courage to be open about their sexuality.

On Monday, 17-year-old Blackpool forward Daniels became the first active male British professional football player to announce he is gay since the late Justin Fashanu in 1990, in a sport still struggling to root out homophobia.

“I hope the steps Jake has taken … go on to inspire other sportspeople to be their authentic selves, and that it helps sport to be more inclusive and drive out discrimination,” said Thomas, 47, who came out as gay in 2009.

Football governing bodies around the world have come under pressure to clean up the sport, with British players regularly facing racist and homophobic abuse from the stands.

There is still no openly gay player in the Premier League.

Daniels said that being gay or bisexual in men’s professional football is “still a taboo” but keeping it secret had impacted his mental health.

“If, by me coming out, other people look at me and feel maybe they can do it as well, that would be brilliant,” he told Sky Sports television.

Thomas, who announced he was gay after his retirement from international rugby and has since become a prominent campaigner against homophobia in sport, said responses to Daniels’ announcement highlighted how attitudes are shifting.

“The positive reaction from the sporting world only goes to showcase the progress that is being made,” he told the Thomson Reuters Foundation in a video call.

“Hopefully this is the start of many more moments to come,” he added, referring to other athletes coming out as LGBTQ+.

The women’s rugby game has many out lesbian and bisexual players. New Zealand took gold at the delayed 2020 Tokyo Olympics last year in the women’s rugby sevens with at least four out LGBTQ+ team members.

Thomas was capped 100 times for Wales in an international career spanning 1995-2007, and also captained the British and Irish Lions in 2005.

Ten years after announcing his sexuality, Thomas told the world he was living with HIV, saying at the time that he had been moved to go public about his health because he had received emails threatening to expose him.

Now he said he wants to address the stigma often faced by those living with HIV, showing the world that a positive diagnosis does not prevent people living active, healthy lives.

“If you ask people to give you their vision of someone (living with HIV), it would be somebody’s who’s very weak, very frail, very non-active,” Thomas said.

“I want to destroy that myth.”

While there is no cure for the human immunodeficiency virus that causes AIDS, drugs known as antiretrovirals (ARVs) can control the virus and allow HIV-positive people to live as long as those who are HIV-negative.

Thomas has also turned his focus to LGBTQ+ issues in the automotive industry, hosting the first episode of Ford Presents Tough Talks with British racing driver and trans campaigner Charlie Martin. The episode can be viewed here.

He has spoken out in favour of trans inclusion in rugby, whose global governing body World Rugby has imposed a ban on trans women competing in elite and international female teams.

Thomas stressed the need to “understand and study and think before we speak” on the issue, adding there must be a place in the sport for everybody.