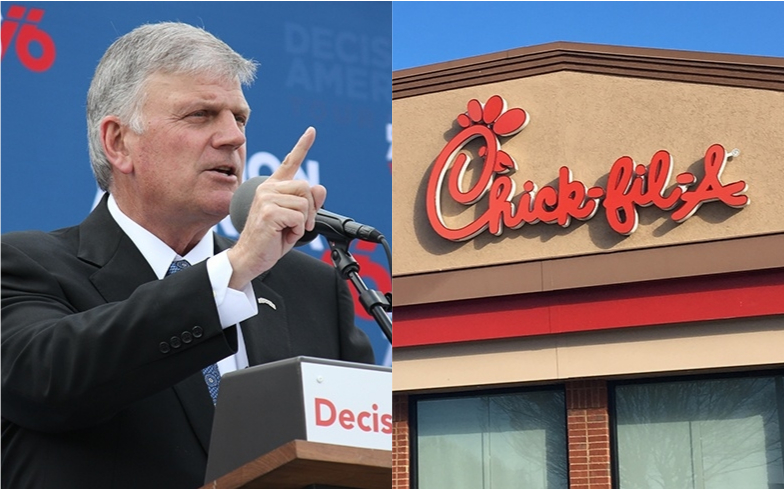 He claimed to have called the brand’s CEO, Dan Cathy.

Tr*mp’s pastor, Franklin Graham, appears to have grown concerned after Chick-fil-A announced earlier this week that it would stop giving money to anti-LGBTQ charities in a welcome statement.

In 2017, Chick-fil-A donated millions of dollars to groups like the Fellowship of Christian Athletes, the Paul Anderson Youth Home and the Salvation Army, who have been accused of anti-LGBTQ views.

Chick-fil-A President and Chief Operating Officer Tim Tassopoulos confirmed to Bisnow that from 2020 they will be refocusing their philanthropic structure away from charities that have anti-LGBTQ views.

However, now Franklin Graham offers a different take on events after he called the brand’s CEO, Dan Cathy. Writing on Facebook, he said: “Dan was very clear that they have not bowed down to anyone’s demands, including the LGBTQ community.

“They will continue to support whoever they want to support. They haven’t changed who they are or what they believe. Chick-fil-A remains committed to Christian values.

“Dan Cathy assured me that this isn’t going to change. I hope all those who jumped to the wrong conclusion about them read this.”

He went on to add: “In my opinion, the gay movement wouldn’t ever be happy with Chick-fil-A unless they were open on Sunday, gave all of their charitable donations to LGBTQ organizations, and flew the rainbow flag over their stores!

“Their hatred for Chick-fil-A is rooted in founder Truett Cathy’s strong stand for biblical ‘traditional’ values and his desire to honor God.”

Franklin’s claims seem to back up what Tassopoulos said in a statement to VICE, on where the brand may donate in the future, which said: “No organization will be excluded from future consideration–faith-based or non-faith-based.”