Frankie Grande opens up about being in a throuple: “There’s no cheating” 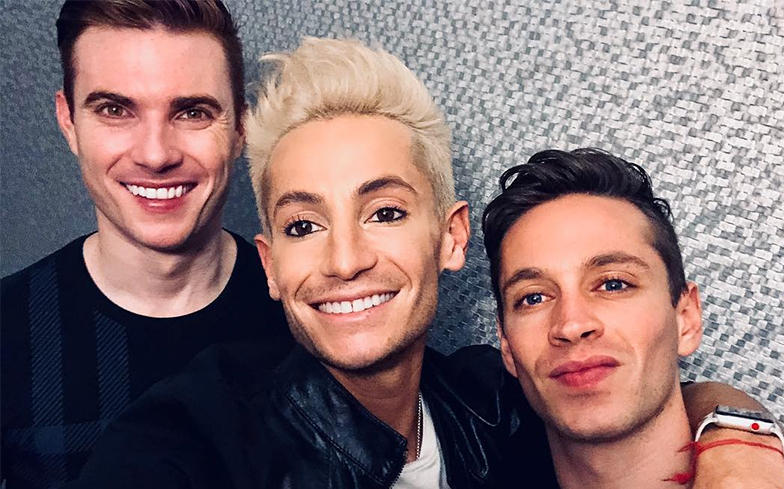 Frankie Grande has opened up about his experience as part of a throuple.

The 35-year-old social media mogul and former Big Brother contestant, whose sister is singer Ariana Grande, revealed last month that he was dating a married couple: Daniel Sonasohn, a lawyer, and Mike Pophis, a doctor.

Speaking to Access Live this month, he offered up some more details about their relationship, including how they met, who pays for what, and how they make sure that no one feels left out.

“I’d been single for 9 years, so I was very open to the possibilities of what love looks like, or what love could be, and it just happened,” he explained. “We met each other, we had common interests and we started dating.”

Frankie said that he met the couple while they were sitting front row at a charity gala he was hosting, and “cosmic sparks” brought them together.

“They do take care of me and they pay for things a lot, which is lovely,” he continued. “Also I’ve been single for nine years so this is all new for me, everything about it is new including dating in general.

“It’s also my first relationship in sobriety, which is a lot of things. [I’ve been sober for] 17 months and 2 days, so I’m very excited about that. It feels like I’m a brand new person again.”

When asked if their relationship is an open one, Frankie replied: “No, it’s not. It is an ethical and committed non-monogamy. So everyone knows what’s going on, there’s no cheating, we’re actually in it together.

“I say it’s like a triangle, which is the strongest shape. There’s three people in it so we can all pick up the things and the slack. It’s great.”

He also said that his mother and 93-year-old grandmother was very supportive of his relationship, joking that “nothing shocks her anymore”, and said that his sister Ariana “loves them” too.

Over the last few months, Frankie has shared photos of himself alongside Daniel and Mike in various situations; there’s holiday snaps, photos of them in their Halloween costumes, and cute selfies galore. Check them out below.

Earlier this year, Frankie spoke to Gay Times about his coming out experience, and revealed he was “so nervous” to tell his sister Ariana about his sexuality.