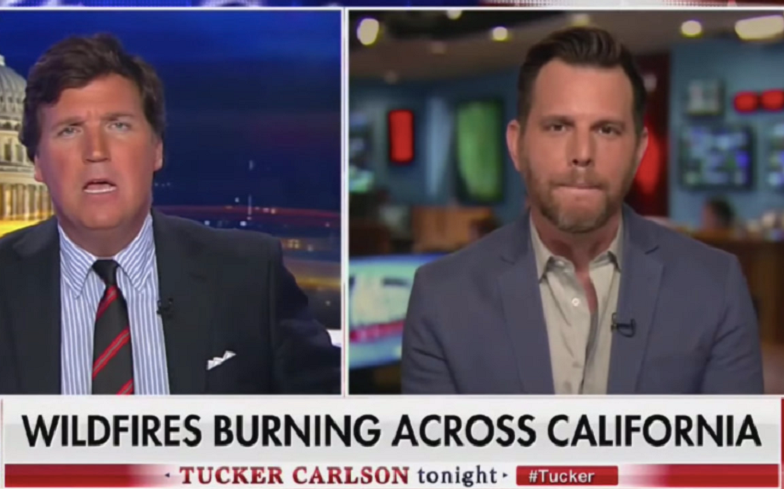 Fox News is at it again.

Fox News host Tucker Carlson and his conservative gay guest Dave Rubin have agreed that the cause of the Californian wildfires is down to utility company PG&E being too focused on having a diverse workforce.

Investigators currently believe the wildfires were caused when a tree fell onto a power line that was operated by PG&E.

Speaking about the wildfires on Tucker Carlson Tonight, Carlson said: “PG&E strikes me as almost a metaphor for the destruction of the state.

“Here’s the utility which doesn’t really know anything about its own infrastructure but knows everything about the race of its employees. How did we get there?”

Rubin chimed in with agreement, saying: “The problem right now is that everything, everything, from academia to public utilities to politics, everything that goes woke, that buys into this ridiculous progressive ideology that cares about what contractors are LGBT or how many black firemen we have or white this or Asian that, everything that goes that road eventually breaks down.”

Rubin then gave Tucker a scenario, saying: “Tucker, imagine if your house was on fire, would you care what the public utility or what the fire company, what contractor they brought it, what gender or sexuality or any of those things he or she was? I mean it’s just absolutely ridiculous.”

Rubin then added: “We just don’t have enough clear-thinking, more libertarian or conservative-minded people in California to fight what the progressives are doing to the state.”

As online articles blasted Rubin’s comments as homophobic and racist, he defended himself by saying: “Nothing I said was racist or homophobic. Actually not that it matters but I’m married to a man.”

Although Carlson and Rubin’s comments are pretty ridiculous, they’re not the most ridiculous thing ever linked to Californian wildfires. Last year, a pastor claimed that wildfires were happening in the state because of the advancement of LGBTQ rights.

In a speech that was supposed to be an attack on California’s record on LGBTQ rights, Kevin Swanson highlighted how the state was the first state in America to show support to the LGBTQ community in many areas, including hosting the first gay Pride march and electing the first gay mayor.

He also highlighted how the state was the first one to introduce same-sex marriage, and the first to pass a ban on gay ‘cure’ therapy.

Swanson then said: “And then, in 2017, the California state schools implemented the homosexual indoctrination programme… and that was the kickoff for the biggest fires California has ever seen in its history, last year. And those fires continue in 2018.

“So God is burning down California in 2017 and 2018 after about 25 years of leading the pack to legitimise the sin of homosexuality in that state.”