Remembrance Day: Looking back at the forgotten stories of gay men who fought in two World Wars 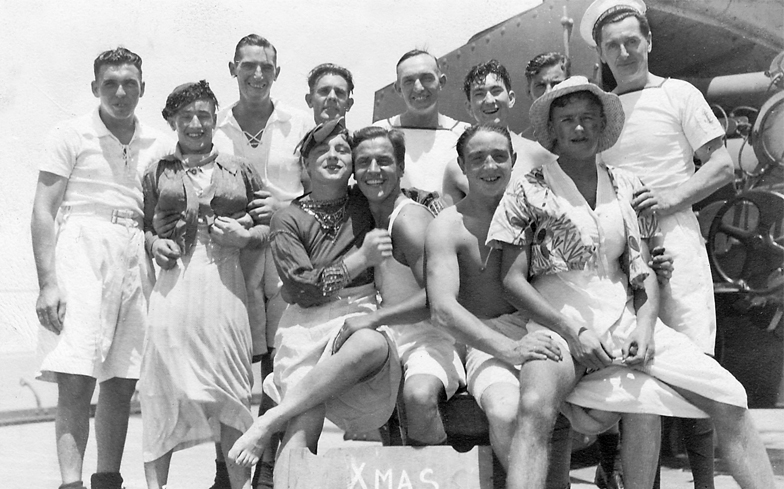 Earlier this year, England and Wales marked 50 years since the partial decriminalisation of homosexuality in 1967. But decades before the Sexual Offences Act received royal assent, thousands of gay and bisexual men fought for their country during two World Wars.

Fighting Proud: The Untold Story of the Gay Men Who Served in Two World Wars brings together the forgotten stories of gay men who served in the BAF and on the Home Front. Stephen Bourne‘s compelling read unearths the tales that are so often overlooked in the history books, remembering officers who ran head first into battle, only to come home to be court-martialled after the war for indecent behaviour.

As we pay our respects to those who gave their lives for our freedom on Remembrance Day this 11 November, Gay Times has an extract from the book that shines a light on how some gay men were embraced by their comrades.

Although they were exposed to homophobic attitudes and living a knife-edge existence, fearful of being found out and court-martialled, it is surprising how many gay men were able to assert themselves and avoid trouble in the wartime armed services.

While researching this chapter, the story of Len and William brought home how some gay men were accepted and embraced by their Army pals. Neil ‘Bunny’ Roger’s outrageous and camp exploits on the battlefield, while facing the enemy and death, will make the reader laugh out loud. And we are fortunate to have Bruce Copp’s informative and entertaining autobiography that reveals how some gay men were accepted ‘without reservation’. These stories will upset the preconception that all servicemen who were found out to be gay or who asserted themselves were victims of homophobia. In Love, Sex and War: Changing Values 1939–45 (1985) John Costello said that the military experience of gay men in World War II “chipped away some of the old taboos”. He added that, in the British Army, King’s Regulations stated “confirmed homosexuals whose rehabilitation is unlikely should be removed from the Army by the most expeditious and appropriate means”.

However, “formal charges were usually only instituted in the British armed forces for those sexual transgressors who had committed a flagrant breach of discipline, especially between officers and other ranks, or civilians”.

In wartime, tolerance or “turning a blind eye” was practised because the potential loss of soldiers would have left front-line regiments badly under strength.

There can be no better example of the changing attitudes in wartime than that highlighted in Jeremy Seabrook’s A Lasting Relationship: Homosexuals and Society (1976). Seabrook’s interview with Len and William, a “happy couple” in their fifties, living in North London, is very revealing and deeply moving.

They had been brought up in the slums of Deptford in South London and they were in their early twenties and working as dockers in Rotherhithe when they became a couple. They were both called up in 1939, and conscripted into the Army, but this meant a separation.

Len became a cook: “peeling potatoes and so on. Do you know, all the officers knew I was gay, and they all accepted it. I had a picture of William by my bed; and I wrote to him and he wrote to me every day. Of course, with the post being so erratic, I sometimes got six letters in a day and then none for a week. One day I was in the kitchen, and one of the batmen comes up behind me and puts his hand over my eyes, and says ‘Don’t look, there’s a surprise for you.’ And I said ‘What surprise?’, and there in the doorway stood Will. I was overjoyed. They let us have the rest of the day to ourselves; so that shows how sympathetic they were to us, it proves they didn’t have any prejudice.” When the couturier and dandy Neil ‘Bunny’ Roger was a little boy he asked for a doll’s house, and got it. At the age of six he was given a fairy costume with diaphanous skirts and butterfly wings. At Oxford he was considered a “beauty” but was “sent down” (expelled) after being accused of homosexual practices.

In 1937, when he was still in his twenties, he established his popular fashion house, known as Neil Roger, in London’s Great Newport Street. One of his clients was the film star Vivien Leigh. During the war he was a hero in battle. Bunny served in Italy and North Africa in the Rifle Brigade. When the Germans were approaching him and his comrades, he apparently told a sergeant, “When in doubt, powder heavily.” As an infantry officer in 1944, he was decorated for charging a machine-gun post at the famous Battle of Monte Cassino in Italy in the attempt to make a breakthrough to Rome.

Bunny showed tremendous bravery on the battlefield but, when he ran into an old friend in the bombed-out monastery of Monte Cassino, he was wearing a silk chiffon scarf and a copy of Vogue magazine was stuffed into his pocket. When his friend asked him what the hell he was doing, Bunny just looked at him and said ‘shopping’.

Bruce Copp’s entertaining autobiography Out of the Firing Line … Into the Foyer (2015) is also one of the most revealing testaments to the gay goings on in the British Army during World War II. Being subjected to homophobia and living with the constant fear of exposure and a court martial was part of the daily existence of gay soldiers. Copp acknowledges that the majority of gays and bisexuals tried to conceal their sexual preferences, but there were those who took risks, and they were not necessarily men who identified as gay. Copp makes reference to the heterosexual commandos he was stationed with at a camp near Algiers who enjoyed a bit of man-on-man action away from the battlefields: “They were the toughest men in the Army, but we were sleeping in pup tents, which housed two soldiers each. Well, every tent was heaving about and bursting at the seams, and you could hear everything that was going on.”

Bruce’s friend Ronald Benge wrote him a letter explaining that their battalion, the West Kents, known as the ‘Buffs’, was “taken over” by a “fifth column” of homosexuals – a higher percentage than average. Benge said: “They were good soldiers and devoted to their comrades. One was either a good fellow or not and prejudices disappeared and gays were accepted without reservation.”

Copp wrote: “I’m not sure about ‘a fifth column’ – I think that might have been a slight exaggeration – but it’s true that the Buffs were famous for having more than their fair share of gay men. Our company commander, a courageous man and much admired by those under him, was very open about his homosexuality, and once he inspected us on horseback while wearing a lot of slap! In fact, I don’t think he joined the Army so that he could see the world; he was so conceited that he actually signed up so the world could see him!”

When Copp was taken ill on the front line, he was taken to a field hospital where he befriended a “wonderfully camp” male nurse: “He was completely over the top, extravagantly gay and he would have definitely been a drag queen in civilian life. I think we called him ‘Fanny’ or ‘Gladys’ or something like that. He was responsible for about fifty wounded or sick soldiers […] He looked after us all, tending to us, bringing us food and providing so much care. He was quite wonderful, and everybody adored him – even though he was so camp. He made no secret of being homosexual, but the boys all accepted him because he was such a marvellous nurse. I’ll never forget him.”

Stephen Borune’s Fighting Proud: The Untold Story of the Gay Men Who Served in Two World Wars is available to buy now. You can order your copy here.