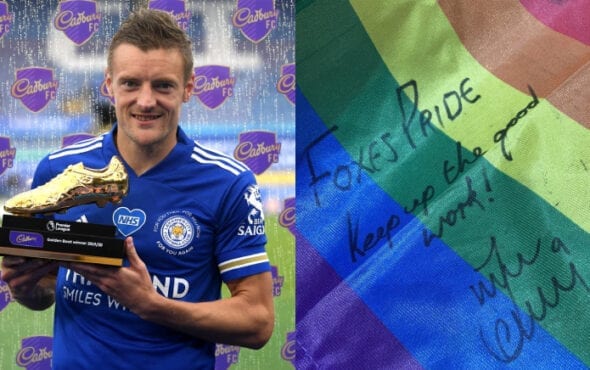 Jamie Vardy has sent a personal message of support to Foxes Pride.

On Sunday (6 December), the Leicester footballer caused controversy when he collided with a Rainbow Laces corner flag during a match against Sheffield United.

After scoring the winning goal, a visibly overjoyed Vardy celebrated by performing a sliding tackle on the flag, destroying it in the process.

The flag was placed on the pitch to mark Rainbow Laces Day, which promotes “community, energy and a sense of belonging” for queer fans in all aspects of sport.

His “annihilation” of the Pride flag ultimately went viral on social media, with many assuming the act was Vardy repudiating inclusivity within football, which is infamous for its lack of LGBTQ+ players.

Another said: “There’s still hope for real men in football.”

To reaffirm his support for the LGBTQ+ community, Vardy mailed the damaged flag to the organisation with the following message: “Foxes Pride, keep up the good work!”

In a tweet, Foxes Pride wrote: “All at Foxes Pride have been saddened by LGBT-phobic comments online over the last few days after Vardy’s corner flag goal celebration.

“We are proud and grateful for the support that Vardy and Leicester City FC continue to show for Rainbow Laces, LGBT fans and Foxes Pride.”

Graeme Smith, the group’s chair, told Sky Sports: “Since being established in 2015, Foxes Pride have always appreciated the support of all involved at Leicester City.

“This gesture from Vardy underlines the inclusive culture at our football club. We are proud to be able to partner with them, not just for Rainbow Laces but all year round.”

How it started. How it’s going. pic.twitter.com/D7GImCD4om