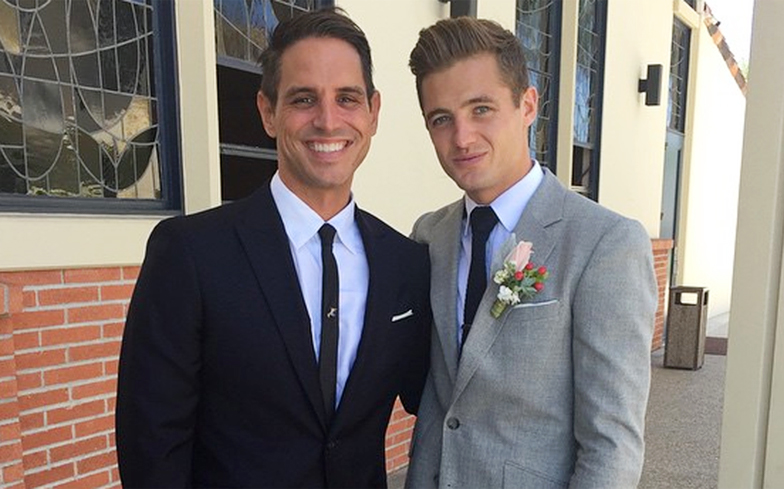 Robbie Rogers and partner Greg Berlanti have married in an “emotional” ceremony.

Robbie, a former footballer for LA Galaxy, and Greg, creator of hit TV series Arrow and The Flash, have been together for four years and have a son named Caleb together. They announced their engagement in December last year.

The grooms were dress in Zegna tuxedos and were given away by Greg’s father and Robbie’s mother during the romantic seaside ceremony on Saturday 2 December.

“Still recovering from the most emotional beautiful day, exceeding any dream I ever had,” Robbie wrote on Instagram alongside a photo from the big day.

“To marry the man I love in front of all of my loved one’s was not something I grew up thinking would ever happen. Thank you to the men and women who made this day possible.”

On the day of the wedding, Greg took to Instagram to share a photo of his now-husband and their son.

“There are two decisions I’ve made in my life that I’ve never been more sure of or that have made me happier,” he captioned the post.

“The first was becoming a dad, the second is happening today with this man.”

Robbie, who was the first openly gay male athlete to compete in a North American professional sports league, announced his retirement from football last month following a series of injuries that required operations.

“It is with mixed emotions that I announce my retirement from the game of soccer,” he said in a statement. “Right now, I feel like I’ve accomplished pretty much everything that I want to accomplish.”

Last year, he made a guest appearance on TV show The Real O’Neals alongside Olympic freeskier Gus Kenworthy, as the two out athletes gave a locker room pep talk to gay teen Kenny.

Meanwhile, husband Greg’s return to the director’s seat for upcoming teen drama Love, Simon is set to make waves, as it will be one of the first major Hollywood movies to feature two men as the romantic leads.